It's cold here. Although we didn't get much of the outskirts of Hurricane Sandy, we have been treated to a string of drizzly days with highs in the upper 30s. I think the weather kept many of the trick-or-treaters at home. Also because of the weather, everything on the meal plan for this week is something that warms us, warms the kitchen, or both. Our meal plan looks like this:
Sunday = Vegan Chinese Garlic Sauce
Monday = Lentil Soup
Tuesday = Almost Irish Stew
Wednesday = Broccoli Rice Bake
Thursday = Chili and cornbread muffins
Friday = Pizza
Saturday = foraging for vegan-friendly food in another corner of Indiana

Broccoli rice bake is slightly mis-named, as there is more than just broccoli and rice in the dish. In reality, this is a casserole with broccoli, cauliflower, rice, and creamy goodness. As a good Minnesotan, casseroles hold a special place in my heart. I honestly don't recall my family eating them that frequently (am I crazy, Mom and Dad? Did we eat them all the time?), but casseroles/hotdishes (and "bars" and "salads" made out of jello) are part of Minnesotan cuisine and culture. Lest you think I kid, Senator Al Franken has held "Hot Dish Offs," there's a major political blog called Hot Dish Politics related to Minnesota's biggest newspaper, there's even a Hot Dish Cookbook! There are three beautiful things about a casserole. First, it can include anything you like. Second, it has that creamy mouth-feel of something decadent, even though it doesn't have to be decadent. Third, it warms your kitchen (and soul). Convinced yet? 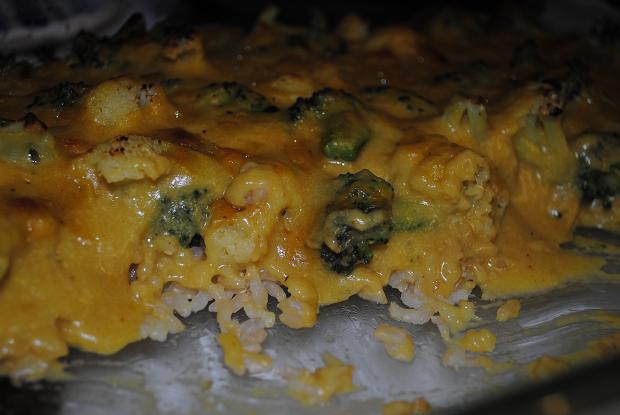 Every week we buy bananas for Shana to eat at school, on the way to school, or in the middle of the night if she gets super hungry. Most weeks, all the bananas are eaten. However, occasionally we have a banana left over at the end of the week. You know that banana. The browning, squishy, BANANA-smelling, one. I'm not sure I'd eat that banana if my life depended on it (when I eat bananas, they have to be yellow-green and firm). Thus, those bananas get tossed in to the freezer, waiting for a time when I decide to turn them magically into something delicious. 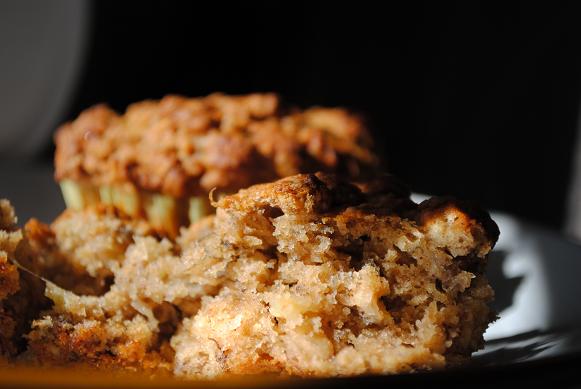 This morning's confluence of factors (the cold outside, our lack of plan for breakfast, a sleeping Shana, a hungry Maggie, and much of the rest of the day to work) turned my groggy morning thoughts to baking, thinking both to warm the kitchen and have freezer-goodies for later breakfasts. It was then that I remembered the seven bananas in the freezer, just waiting. Yes, I said seven. In short order, four of the frozen bananas were out, thawing on the counter.

The recipe below is one of the first breakfast recipes I tried on my own after going vegan (well, that wasn't pancakes) and it is great! It is actually one of those recipes I frequently find that are essentially vegan, meaning all I have to do is replace a very common ingredient (e.g., cow butter for vegan butter). There's no replacing of eggs and no "weird vegan ingredients" (most people think of things like flax seed and wheat germ as "weird vegan ingredients"); there are just pantry staples that are combined into the best banana muffin I've ever had.

It's starting to be "that time of the year." You know the time, when the days are getting noticeably shorter, you start to think earnestly about holiday parties and schedules, and you start to crave baked goods and rich foods as if you were going in to hibernation (okay, maybe that last part is just me). Invariably, as soon as mid-October rolls around, I start to think about all the ridiculous holiday cookies I plan to make (I have some October favorites, so stay tuned!).

With that said, it's a little early for holiday cookies, but it's never too early for vegan treats!! Thus, I've decided to roll out a new and regular feature to my blog, which I'm going to call Vegan Viands. The Vegan Viands posts will all be about fun vegan treats or snacks, things we don't eat regularly but are still important components of vegan cooking. I mean, after a delicious vegan meal, a luscious vegan dessert is in order. Or, let's say you've been invited to a football party and want to make sure you have something vegan to eat, you need a go to vegan snack that's easy to transport, share-able, and delicious.

But why Vegan Viands? Well, hmm. First, I am my father's daughter and alliteration is awesome. Second, I vetoed other words for various reasons: "sweets" - not everything I want to put in this feature is sweet; "treats" - there's already an AWESOME vegan bakery with that name; "vittles" - based on victuals and just didn't have the right connotation (has a boring/last resort implication to me); etc. Third, I love words! Why not use this as a way to use an uncommon word! The word viand has just the right connotation to me. So, without further ado, here are TWO (yes, two!) recipes for the first Vegan Viands feature, both of which are coming to a football watching party tonight.

There was frost on my car when I went outside this morning. I suspected as much since I could see frost on the neighbor's roof. We're due for another night of freezing temps tonight, too. In all honestly, the cold doesn't bother me too much. It means sweaters and cold noses, crisp-smelling air, beautiful fall colors (hopefully they stay for our drive to State College), and as many soups and stews as I can eat in a week! I wasn't kidding when I said we eat soups and stews frequently in the fall and winter.

Tonight Shana and I had two friends over for dinner. One is a friend from my job and the other is her foster daughter (a first-year student at the University of Evansville who was back on her fall break). When our friends arrived tonight, we got right down to making dinner. This soup doesn't take an incredibly long time, but we were all hungry. For all its simple ingredients, this soup is a winner in my book (it's the one we call "fatty fatty potato soup"). It's a great cold-night, warm-tummy soup, and Shana and I think it tastes a little bit like the breading on Kentucky Fried Chicken due to the dark roux and pepper. Neither one of us is huge pepper fans, but in this soup it's worth it! We also made roasted broccoli, but I think a post on oven-roasted veggies is in order some time soon. Anyway, on to the recipe!

Long ago, shortly after I went vegan (so, really only 10-ish years ago), my aunt found a cookbook published in 1978 from The Farm, a purposeful vegetarian commune established in 1971. This cookbook is SO quintessentially 70s! There are drawings and pictures and all of them scream 1970. Even the language used in the book is decade-specific. Although the cultural snapshot is great, the recipes are also pretty good, too, especially given that the members of The Farm were vegetarian before many other people were vegetarian. The cookbook has all sorts of recipes that are generally obsolete today (for all but the more hardcore DIYers, anyway), such as making your own wheat gluten (used in seitan, a meaty protein) by washing flour or fermenting your own tempeh (pressed soybeans). We can buy all of this at the store today.

This cookbook is a great reminder that we don't need fancy ingredients to make delicious and wholesome vegan food. In fact, one might argue that the recipes in this cookbook make even more wholesome food because they do NOT rely on fancy ingredients. (This is a conversation for another day.) In the cookbook is a recipe for a tofu pot pie. Although I don't really follow any of their directions (or even use most of the same ingredients), it prompted me to attempt to make a tofu pot pie. In my pot pie, I do use the gravy recipe from this cookbook, which is absolutely delicious and totally makes the pie! 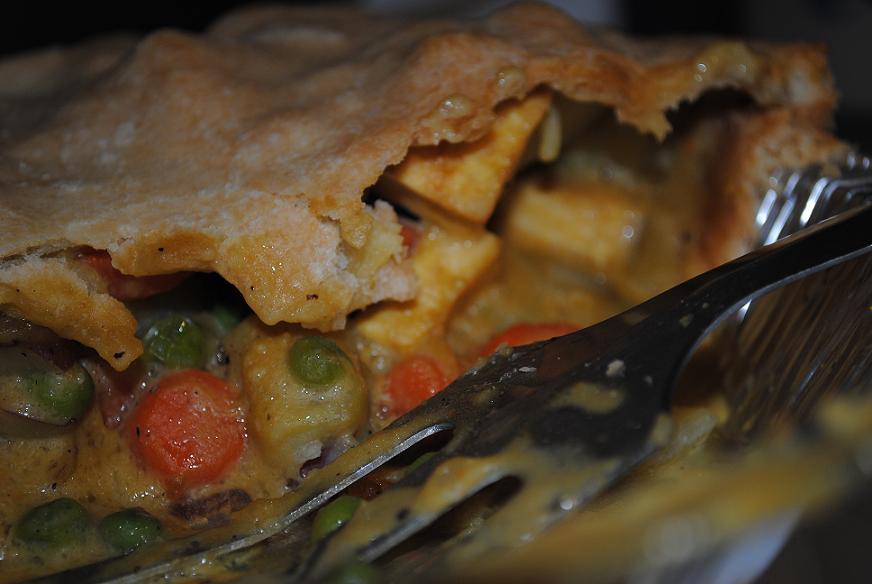 A word of warning: this is NOT a fast recipe. It's easy, yes, but it takes a while and uses a number of pots and pans. However, it's very much worth it, and feeds Shana and I for three meals.