Sometimes you just want to fit in. While that's a pretty broad statement (and well-supported by psychological literature, says day-job Maggie), right now I'm referencing food. It can get tiring eating things that other people find unpalatable, unusual, or just plain unknown. Perhaps the search for a feeling of "food normalcy" is what has driven the incredible surge of vegan faux-whatever products - hot dogs, deli slices, cheese, ice cream, even egg yolk - that are available on the market today.

At some point a few years ago, I was having a strong desire to be "food normal" (not enough to stop being vegan!). That night, I decided I wanted to eat something that was "normal" as far as the S.A.D. (Standard American Diet, love the acronym) was concerned, so I decided to try to make a vegan "hamburger" helper. I don't recall why I chose this food in particular, especially considering that I never really ate this as a kid (like some other meals), but I was on a mission. The first time I attempted soyburger helper, it was barely edible. However, I decided not to give up, and have since developed a recipe that is delicious and that makes me feel more "food normal." Plus, it's fast and easy, but Shana wants me to warn you that it kind of looks like dog food. Sounds like hamburger helper to me! 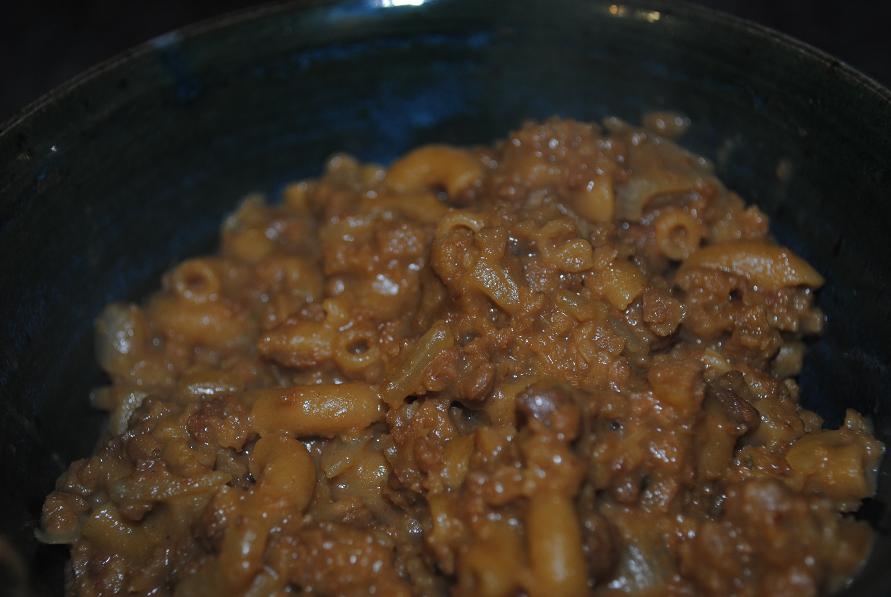 We're back (and a bit more tan)! Our week away was wonderful - full of family time, new sights, and new experiences! I managed to get most of my necessary work done while I was gone, which really just means that I'm prepared for tomorrow. Hmm, and when I say "prepared," I mean that only as far as definition 1a of the link (making things ready), but not so much as far as definition 1b (a proper state of mind). I think the real world is going to hit with a vengeance.

Staying with the idea of preparations, however, I thought I'd ease back into blogging by posting about a variety of "sauces" that I make. There are a variety of sauces I make for specific dishes (you'll see a new one later this week), some of which I've posted about already. These sauces can certainly be used for other applications (e.g., the sauce from garlic wine pasta might be decadent over some faux chicken), but this post is dedicated to sauces that aren't for anything specific. You  know, the ones that you might use in other recipes, or for a variety of different applications. Admittedly, this list is based on my own food preferences and experimentations, so I might be missing something you'd assume was here. If that's the case, leave me a comment because I'm 99% positive I've got a recipe for every sauce you can think of in one of the cookbooks I've got or links I've saved. Happy saucing!

In any other year, tonight would be a night where I would start looking forward to vegan goodies during Thanksgiving (and one where I'd likely be packing or en route to a Thanksgiving destination of Minnesota or Philly). However, this year, Shana, me, my parents, and my sister are going on a cruise - a first for us all. So, instead of writing a post about making a faux turkey, roasted veggies, wild rice stuffing, mashed potatoes, and vegan pumpkin pie (plus all the nostalgia that begins to hit me just about now every year), we spent tonight packing swim suits and flip flops, finding the sunscreen, cleaning out the fridge, and being both excited and nervous about our trip.

When I come back, I'll get back into the swing of things. I've been debating which post(s) to do next. I've got some delicious dinners in the back of my mind, or maybe a new Vegan Viands post, or maybe even diving in and introducing you all to the wonder that is seitan. Who knows, maybe I'll find something delicious on our cruise and figure out a way to recreate it! Regardless, I'll have some fun recipes for you. In the meantime, I wish you all a happy, safe, and plentiful Thanksgiving.

Posted by maggie at 9:21 PM No comments:

Hello lovely readers. My apologies for neglecting you; I've just been swamped. Even now, I should either be grading something, reading something, or prepping something for one (all) of my classes (or doing the dishes or cleaning my side of the bedroom or...), but I just don't have the brain capacity right now. All this is a really long way for me to apologize if this blog post doesn't make any sense. :)

I've created a list of blog posts that I'll eventually get to, but this one about roasted veggies seemed like a perfect post for the changing of the weather (it was 70 two days ago and only got to about 40 today). You might be asking yourself why roasted veggies deserve their own blog post. If so, that's okay. It's just likely that you've not experienced the amazing transformation veggies make in the dry heat of the oven! Plus, if you're new to vegan cooking or eating, roasting veggies makes leads to a different taste compared to any other cooking method. Thus, this is a great way to make it easy to eat any veggie multiple times without it getting old. As far as I'm aware, almost all veggies can be roasted to amazing results. I say "almost" since I've not tried them all, but every one I've tried is amazing. Pair them with a whole grain or some lovely lentil dish, and you've got a complete and satisfying meal.

What I've got in the rest of this post is a basic roasting method, a couple specific combinations we love, and then suggestions for your own future experimentation (plus a beautiful picture my sister took of roasted veggies). So dig in!

One of the most wonderful thing about veg*n food is that it forces you to go beyond your own culture's ideas about how food is prepared, spices/foods that should and should not be combined, what makes a meal, and many other food-related boundary expansions. Consequently, most veg*ns eat a diet influenced by all areas of the globe. This week alone, Shana and I have food with influences from the Middle East, Italy, Mexico, Asia, and America. Not bad for one week (especially considering we have two meals as of yet unplanned)!

Mujaddara, the dish we had for dinner tonight, is a combination of lentils, rice, and onions (well, and spices). The combination of lentils and rice is a staple dish in many parts of the Middle East, although the flavor profiles are variable. Aside from being delicious, this dish is cheap, easy, and filling. Oh, and it freezes well! This version also makes a ton (we had it for dinner, then made four servings of leftovers).

Before I dive into the recipe, I have three warnings. First, this dish is not a visually appealing dish (it's not bad, just not beautiful), but the taste makes up for it! Second, my technique for cooking this is not traditional (but it's easy!). Third, in this dish, I generally eye-ball the amounts for spices. I tried to guesstimate while making it tonight, but who knows... 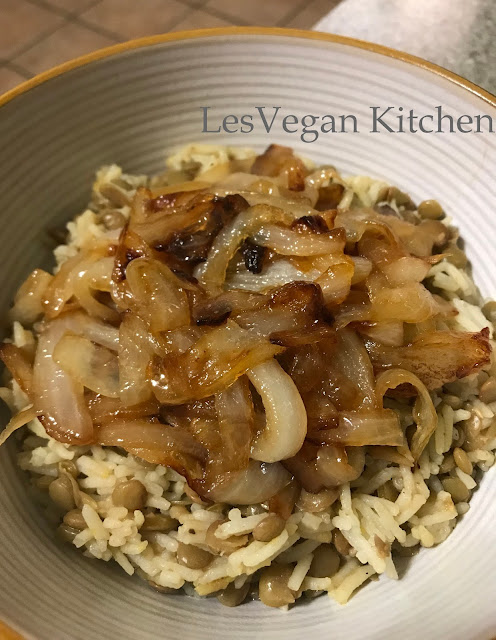 I should be grading. Instead, I've done a small bit of grading, some bill-paying (it's the beginning of the month), helped a panicked student with a grant proposal, and am now writing a blog post. However, this post will be short and I promised myself I would go back to grading when I'm done.

Tomorrow night Shana and I are going over to the house of some friends for dinner. We have so much fun with them! We'll play games and laugh and talk (about work, as they both work at my school, Shana's kids/job, and life). We're also making pizza with them, so there will be eating. But what's more fun is that one of them has a birthday on Sunday! However, apparently she doesn't like a big deal made of her birthday, but her husband told me that it would be fun to celebrate with just the four of us, but it's a mini-surprise for her. There won't be presents, but there will be cake! I offered to make one to bring over, and since she's lactose intolerant, a vegan cake fit the bill.

I was told that she liked chocolate cake and since one of my psych colleagues reminded me about the deliciousness of wacky cakes, that's the direction I went. Wacky cakes are rumored to have started either during WWII rationing or during the depression (as they are egg, milk, and butter free, which were rationed and/or expensive). I thought sugar was rationed during WWII as well, but I wasn't alive, so I don't know and I didn't take the time to look it up on teh interwebs. Regardless of where it came from, it's a delicious, moist, and easy cake, made with ingredients you likely already have in your pantry.