If you're friends with me and Shana on Facebook, you've likely seen her tag me under a recipe or share something to my wall with "veganize this?" or "make this for me?" and nothing else. As it turns out, she does that outside of social media, too. Years and years ago, Shana used to have a subscription to a magazine that no longer exists, but it often included recipes that were easy and quick to prepare and targeted at families with children. Recipes would get torn out of the magazine and excitedly waved in my line of sight. Sometimes they were made right away, but often they went into the giant stack of recipes I want to try.

When looking for a new dish to make a while ago, I stumbled upon one of those torn magazine-page recipes. It looked good, especially with the tweaks I was envisioning to make it both vegan and a one-dish dinner. With approval from Shana to try something new, the rice skillet dinner was a go and resounding success! Nothing fancy, just warm comforting goodness for when you're short on time but still want a delicious meal.

Oh, and make sure to use your largest skillet! A 12" is a necessity (or cut the recipe in half)! 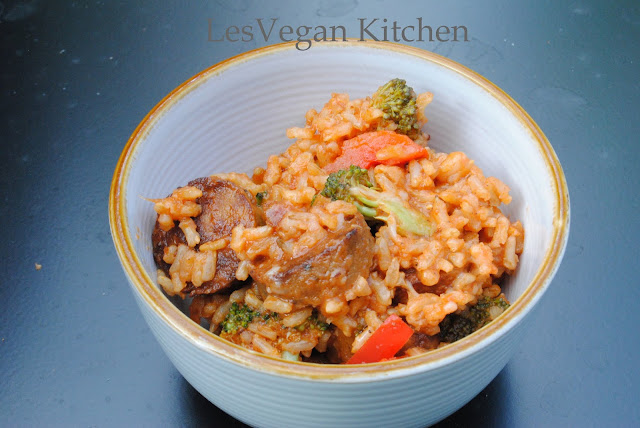