A few years ago, I was so excited to have successfully made a vegan version of Shana's Mommom's sweet kugel. Here's the problem: as delicious as it is, Shana kept saying that she didn't want to eat it for dinner because of its sweetness. But the comforting casserole texture kept coming to mind, until I finally decided I wanted to attempt a savory version.

Keeping the basic idea (tofu & noodles in a casserole), I played around with flavors and veggies until I found something amazing. The thin strips of veggies provide some subtle textural contrast, but it's the blend of spices - most notably the roasted garlic - that provide warmth and depth to this version of kugel. Hearty, savory, and comforting all at once, this kugel is a clear winner.

Having this tonight, before the whirlwind of our semesters starts in earnest, was just the comfort we both needed. 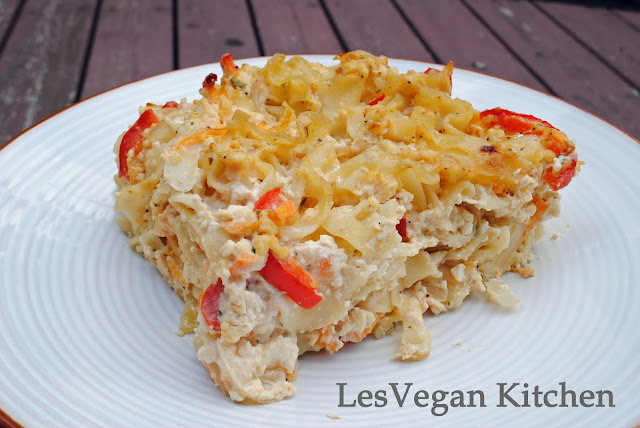