When planning for meals this week, I decided that I didn't care that the temps we going to feel like late winter, I was going to make it summer in my kitchen by making Alice Salad. This salad was named by my aunt (the paella aunt) because the two women she knew who made this salad, one of whom was my grandmother, were both named Alice. It's not really named Alice Salad, but most people call it "ramen coleslaw salad" and I think that sounds dull.

In all honesty, this recipe can be as simple or complex as you like. At it's most basic level, it includes only five super convenient ingredients. With so little involved, this salad comes together in no time. In addition, because of the convenience of the ingredients, it's a great picnic or potluck food! Bring everything with you, take two minutes to combine, and then you've got a delicious and healthy salad that will disappear in no time due to its light and refreshing taste. In fact, I brought all the ingredients to school today and made it at lunch. Two colleagues and a student shared it with me, but I'll still have some left over. Works for me! 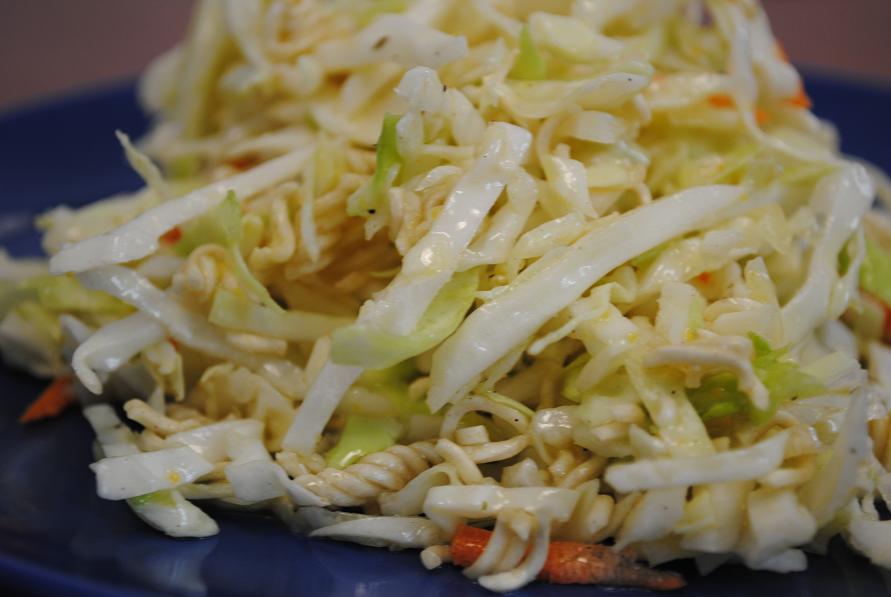 A few weeks ago we were at the grocery store when Shana saw a tube of pre-made polenta and decided she wanted to eat it. In to the cart it went and off went my head, racing to think about what I would make. Since we don't eat polenta regularly, I did what anyone would do, asked google. Google told me that most people use polenta like pasta, covering it with tomato sauce and cheese. That didn't sound quite right to me, not just because of the cheese. Honestly, it just sounded boring. Commence creative googling.

Finally, with germs of ideas of a number of places, I punted. Luckily, my imagination led me to a delicious dish. We tried it the week we bought the polenta, but I wanted to test it one more time before I posted it here. When we wandered past some polenta at Jungle Jim's last weekend, I figured it was time to try again. Tonight was the night. The second time around was just as good as the first! Plus, since I knew what I was doing, I also realized that this is an incredibly speedy dinner, going from the fridge to the table in less than 30 minutes. 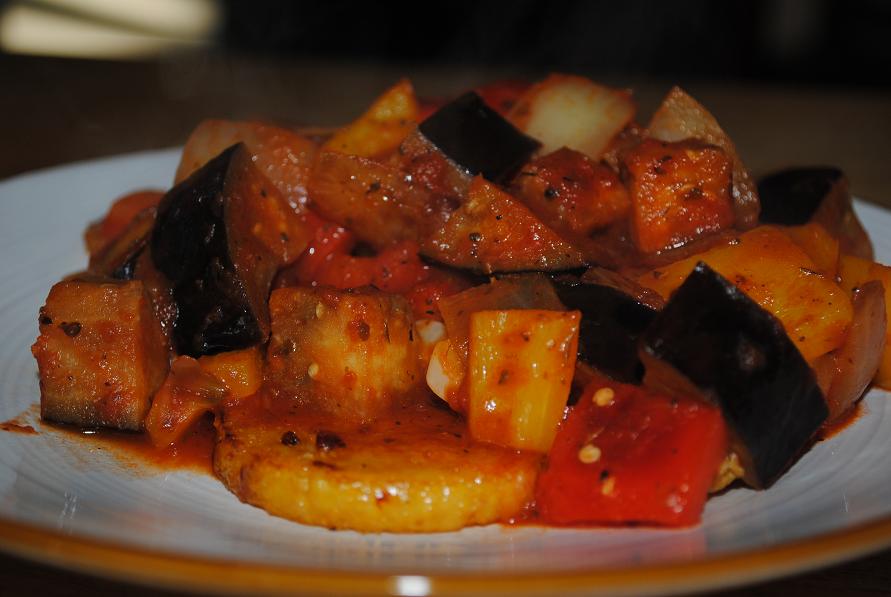 Because it's not quite officially spring and because my weather for the next week looks more like early February than mid-March, I got really excited to see a sure sign of spring at the grocery store this afternoon: RHUBARB!

Rhubarb is one of the first plants to emerge from gardens (although given the time of year, my rhubarb was likely grown in a green house) so it's a harbinger of more growing goodness to come. Bitter on its own, with poisonous leaves, rhubarb is delicious when cooked up with sugar in something sweet. Although many people use it for pies, I'm a good Minnesotan, which means I eat bars. These bars were something that appeared at many a spring/summer party (and sometimes "just because") while I was growing up. Thus, when my mom gave me this recipe, the fact that I only had to sub in vegan butter to make the recipe wholly vegan was awesome.

Since I'm on spring break this week, making a whole batch of these means most of them will be heading to school with Shana tomorrow. I'm sure her teacher friends won't mind. 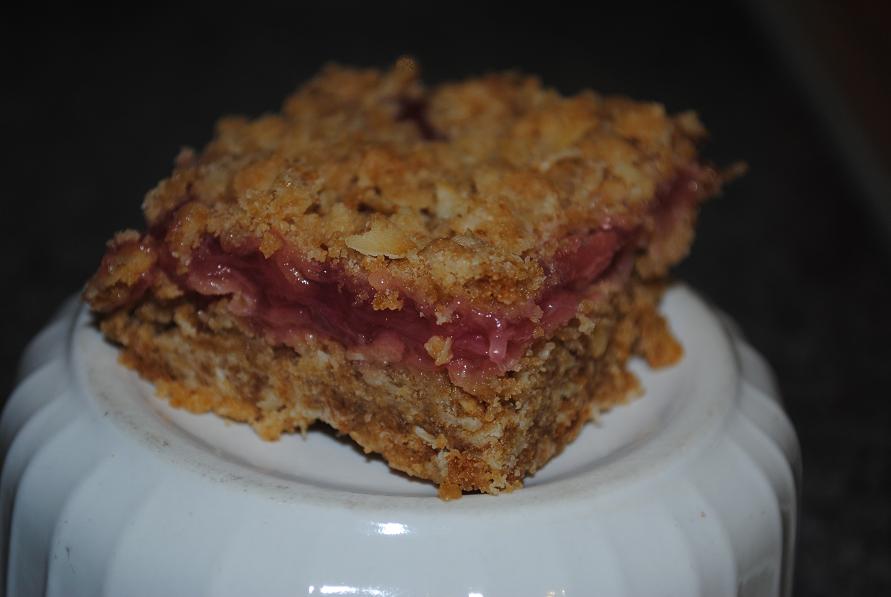 Lasagna is one of those dishes that I never ate a lot as a child (like spaghettios), but started craving as an adult. However, since I'd never really made it, I had to do some investigation. In addition, I started thinking about lasagna in the early days of my veganism, when there wasn't nearly the veg*n presence on the web,  nor the relative abundance of veg*n-friendly products in grocery stores. I found some recipes filled with meats and cheeses and figured I'd just change things up a bit while keeping the basic recipes intact.

My first attempts at lasagna failed miserably. Since these attempts were more than 10 years ago, one would think I would have forgotten them by now...no dice. I couldn't figure out the right blend of ingredients, couldn't make the floppy noodles do what I wanted, and the layers never remained as layers. After a few times of feeling like I had the culinary equivalent of two black thumbs, I started asking for input. My mom suggested attempting a lasagna without boiling the noodles, one friend suggested ignoring all veg*n cheeses (which were awful at the time!), and another friend suggested that I just throw things I liked to eat in between noodles and call it lasagna. I took some of all of that to heart, eventually landing on the delicious recipe below.

The Bests have left (though not before coming to see me teach this morning). Since their departure is sad, tonight's new dinner success was a nice emotional balance. I've been trying to cook this dinner for a while, but I'd been running up against a missing-ingredient wall called "celery root" (aka celeriac). I think my issue was two-fold. First, I started trying to look for celery root late in its season. It's generally a late autumn/winter veggie, but I started looking in February. Second, our local grocery stores don't have the widest selections of unique veggies. Although they are pretty good (kale, snow peas, parsnips, etc. are all regularly found), something that most Americans do not cook is not likely to find its way to a produce section near me. Luckily, our trip to Jungle Jim's this weekend with The Bests yielded a gnarly-looking tuber.

This meal was series of new things for us. First, the celery root, obviously. Second, the use of herbes de Provence, a seasoning blend we don't use with regularity. Third, we used orzo pasta in something other than soup. Certainly all of these things are normative for many cooks and eaters, but not for us. In Shana's mind, celery root = celery (i.e., gross), herbes de Provence has rosemary (a no go for her), and orzo is only for soup. With all that going against it, this meal was delicious! It was a lovely blend of textures and flavors and something we'll certainly make again! 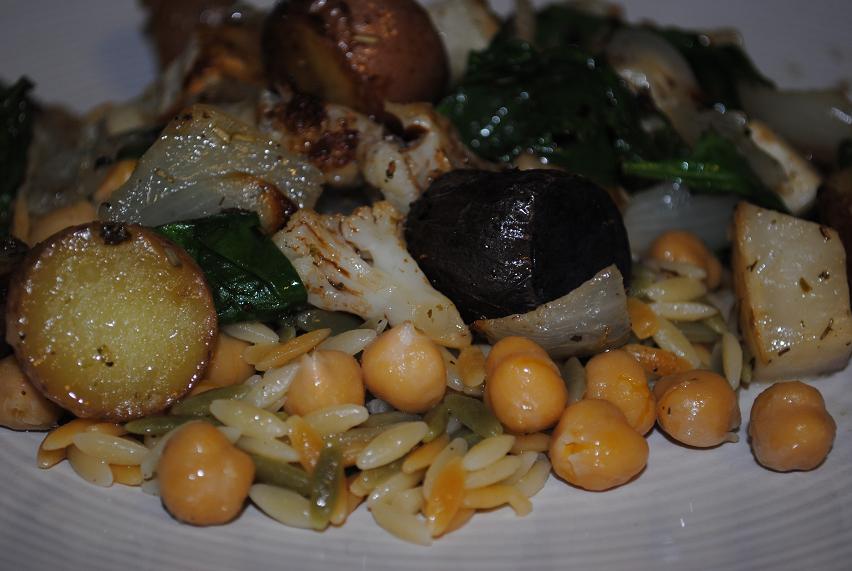 Our best friends came to visit us this weekend. Aside from an absurd amount of laughter, we've done so many fun things! For example, we went to Jungle Jim's (an amazing grocery store), watched a documentary called Miss Representation on campus, and played with mBerry tablets (which we also did when my parents were in town last month).

When the four of us get together, I do the cooking for our major meals, which I absolutely love. As should be obvious by now, cooking makes me happy and cooking for others makes me extra happy! This weekend our food has consisted of garbanzo pasta (which The Bests hadn't had and very much enjoyed), Thai Food in Dayton, and penne vodka is coming tonight. One of The Bests likes penne vodka so much that she calls it "love sauce." The other normative food-related activity when we're together is to have some kind of treat. We started throwing around ideas, but then when I learned that The Bests hadn't had cake cookies, the conversation was over. These are SO good and they are the easiest cookies to make (so easy that I feel badly about calling a recipe... maybe if it was "recipe" I'd feel better). We made two flavors today: classic yellow and red velvet. 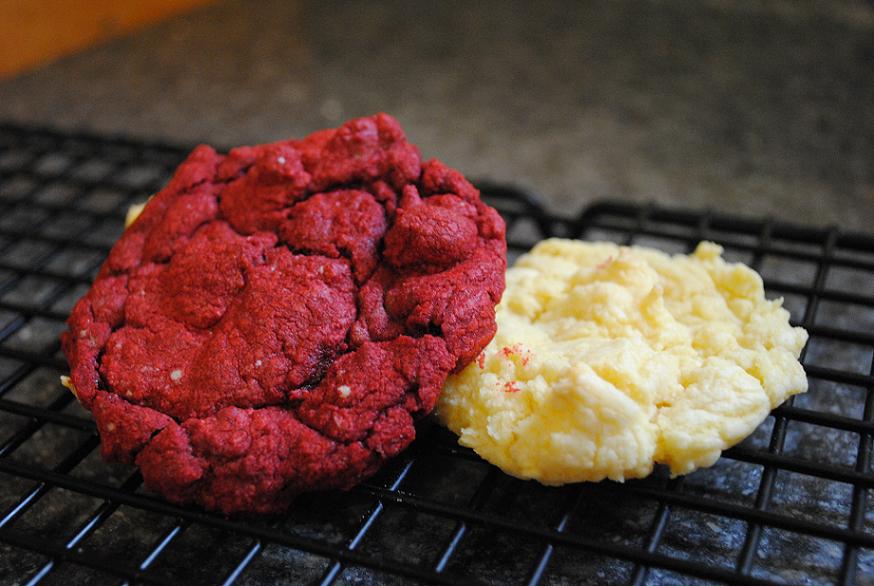