I've mentioned before how much Shana loves Chinese food. It really is her automatic go-to choice for dinner. Thus, when I was showing her some of the new recipes I wanted to try, this recipe for vegetable moo shu wraps jumped out at her. Since they sounded good and looked reasonably do-able, I agreed. Plus, they were an excuse to buy one new ingredient and test out the slicing blade on my food processor. This second time around they were as delicious as the first time and I figured out how to make the tofu work.

If you've never had moo shu wraps, they are basically shredded veggies that are stir fried, sauced, and then wrapped in a thin pancake. I would assume that they are infinitely adaptable ("gee, I should really use up this bell pepper in my fridge"), but I've not tested it out. A word of warning though: if you do not have a food processor with a slicing (and shredding) blade, the prep time on this would be tedious! But, with a food processor, you'll be ready to eat in less than 30 minutes. 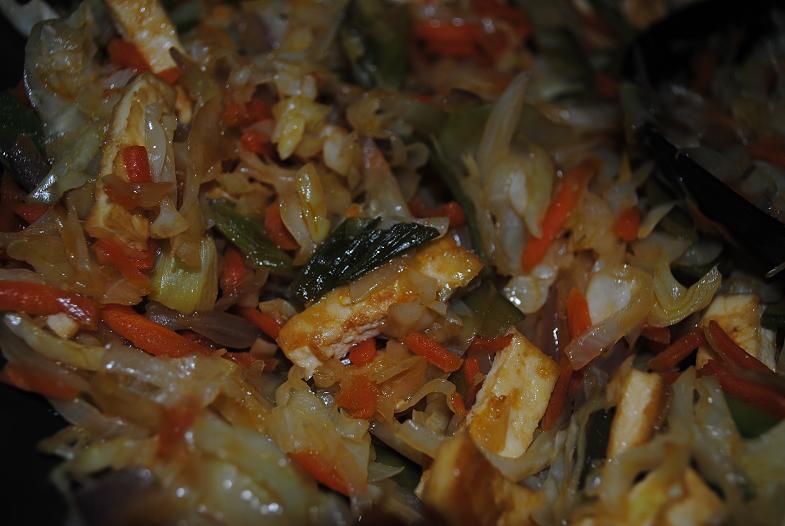 My parents came in from Minnesota for a long weekend! They came in primarily to see Shana's roller derby bout, as neither of them had seen her skate (or derby in general). They enjoyed Shana's bout and we did other fun things as well. For example, they came to listen to me teach this morning and we did a miracle berry tasting yesterday afternoon. If you've never experienced miracle berry, you should try it! Both my parents really enjoyed the experiences!

Whey they arrived, they weren't sure about their plans to drive back to Minnesota. They ended up staying Monday night, rather than driving back on Monday. Thus, on Monday night we needed a dinner that we could all eat. When I say "all eat," what I really mean is a meal that is veg*n for me and Shana and familiar enough for my mom. She's tried a ton of new vegan foods over the past years 12 years since I went vegan (and started asking her to try stuff), but she still enjoys things more if they are more familiar to her, just like most of us do. The answer to all of our needs was vegan baked ziti. It's easy (especially with a food processor), reasonably quick (under 40 minutes from getting things out to eating), and delicious! 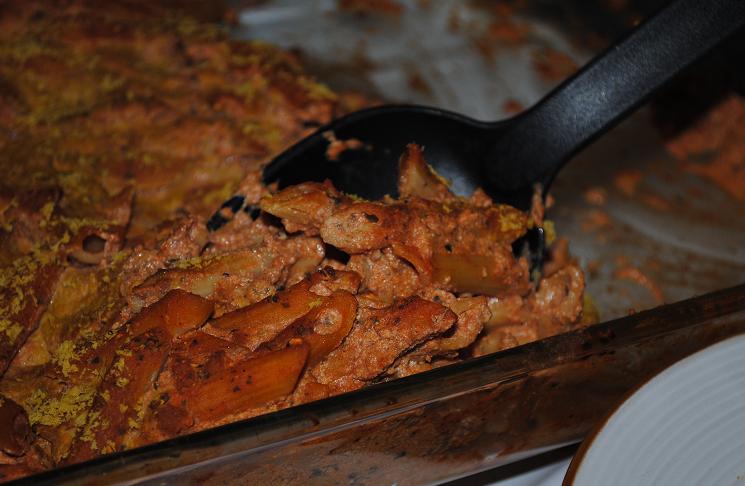 Normally, baked ziti is full of cheese, but this version has all the creamy richness without the dairy. You won't miss it! 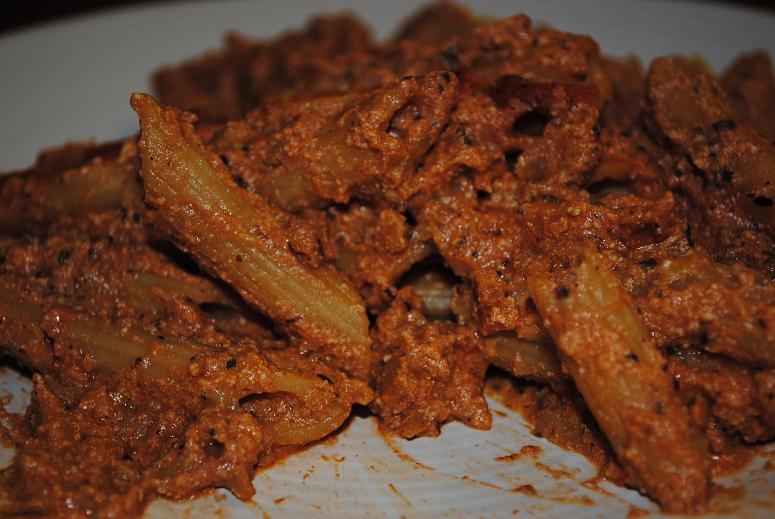 I spent some time living in Spain one summer during my teens. Although much of it was awesome, one of the coolest things was eating paella with my extended Spanish family on the weekends. Back then I was still an omnivore, so the traditional paella fillings of chorizo and seafood were fine (though I didn't eat the seafood ones much). Since going vegan, I'd not had paella in ages, until two occasions reasonably close to one another. First, Shana and I celebrated a friend's engagement at a restaurant serving vegan paella. Second, my aunt made some after hearing me talk about how much I wanted to recreate the flavors I remembered. The first dish (at the restaurant) was good, but not paella. The second dish (my aunt's) was awesome, but I needed to figure out a way to recreate it. That same aunt (and uncle) ended up giving us a paella pan as a gift, so I've been perfecting since then. 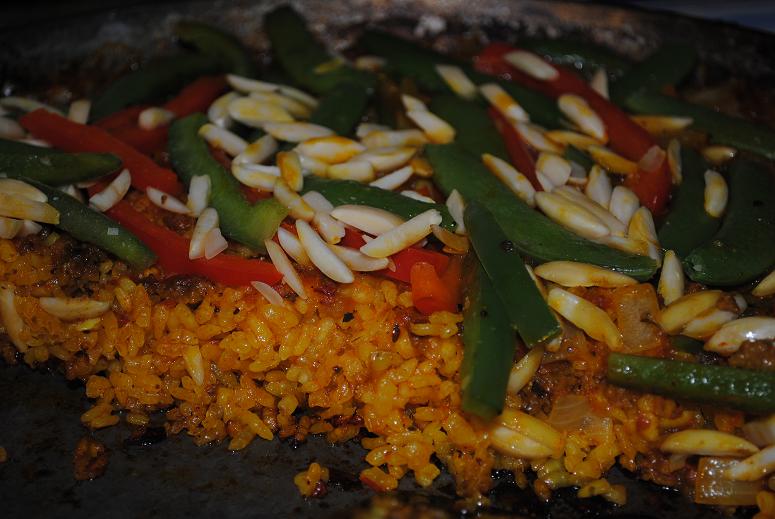 The other night we had a friend over for dinner. She wasn't sure she'd ever had paella, but she said was more than willing to try it. She loved it. But in all honestly, I've not fed this to a single person - omnivorous, vegan, or in between - who hasn't loved it. That's awesome since I think it's delicious. It isn't a particularly hard dish to make, either, but it does require a few items that you may not have laying around, such as vegan chorizo, saffron, and a paella pan (oh, and a gas grill will make your life easier).

Let's talk a bit about vegan chorizo (and other faux meats). In a well-stocked Whole Foods-esque store, you're likely to find multiple varieties of vegan chorizo. Whichever brand you happen to choose, they will be made with a lot of wheat gluten. Wheat gluten is the protein part of wheat and it's what makes bread chewy. In addition, it is often used to make faux meat products. Clearly, if you are gluten-free or gluten-intolerant, stay away from anything including wheat gluten or "seitan" (say-TAHN). However, if you do/can eat wheat gluten, seitan is going to be a great aid to you in the veg*n kitchen. It has a much "meatier" texture than tofu does and holds together far better, as well. Because of that, it's a great replacement for meat in a lot of dishes (think stroganoff, stir fries, etc.). You can often buy pre-made seitan at the store or you can make your own (I do!). Anyway, enough jabber, how about some food?! :) 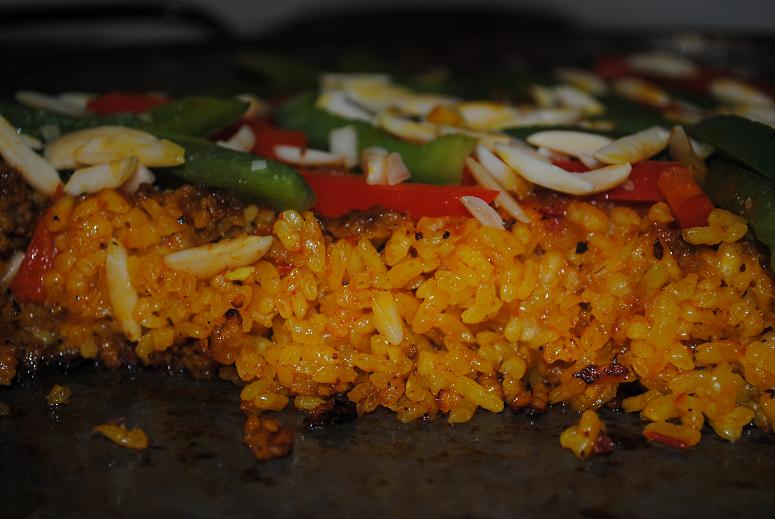 Breakfast as a vegan can be super easy (think oatmeal and fruit), but many people think it's a difficult meal to veganize due to Americans' heavy reliance on things like eggs and breakfast meats. However, that perception is wholly unfounded! It's easy to veganize nearly every breakfast food you can think of, often far more easily than you might imagine. For example, commercial mixes for pancakes and waffles are often vegan (though check carefully, because some are not), substitutions can lead to things like a killer vegan quiche, and there are a ton of faux meat things you can buy.

One of the few breakfast tastes that eluded me, however, was french toast. Sure, I could make something cinnamony and delicious, but I couldn't get it to have that "eggy" taste that I associated with the french toast of my pre-vegan days. But after a ton of experimentation and recipe perusal, I zeroed in on a french toast recipe that has the flavor and texture that I love. The keys are the use of garbanzo bean (chickpea) flour, high quality bread gone stale, and a slow cook time. 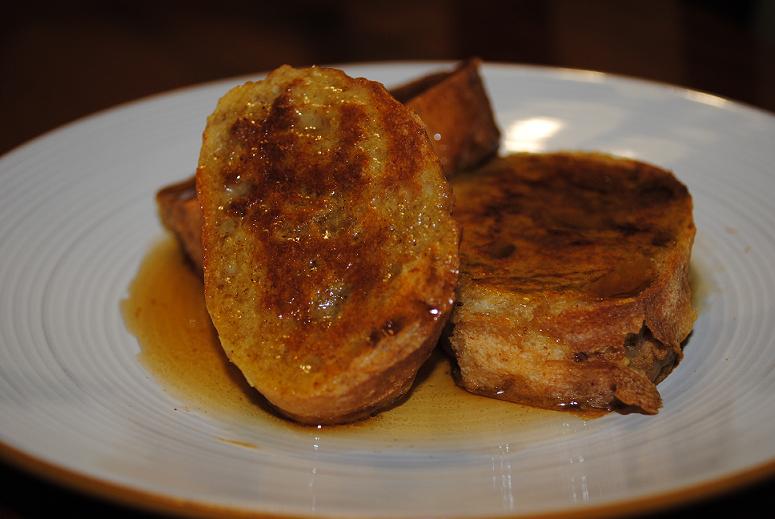 Today is Superbowl Sunday. We're not doing anything major (as we both have to work tomorrow), but we do have a friend over to watch the game with us. Although we've been to many really awesome Superbowl parties, this quiet night is a great way to end a relaxing weekend. Plus, a quiet Superbowl means that I don't have to plan all sorts of snacky party foods. However, even though I didn't make a ton of snacky party foods, no Superbowl would be complete without at least one fun food.

Here's why this fun food emerged today, even though the flavor profile is completely "fall." We've been trying to use foods that we have in our cupboards/pantry. Thus, last night I made a soup called Autumn Harvest Pumpkin Lentil Soup, a pre-made mix that we got at our favorite apple picking spot, Way Fruit Farm. The soup calls for 1 cup of pumpkin puree, but that left almost half of a can of pumpkin puree remaining after dinner. I couldn't let it go to waste, but since we didn't have any more soup, the next most obvious application was cookies! Plus, these cookies are freaking ah.may.zing. I saw them somewhere more than a year ago, but I can't for the life of me remember where. There are many similar recipes on the internet, but most of them call for eggs. 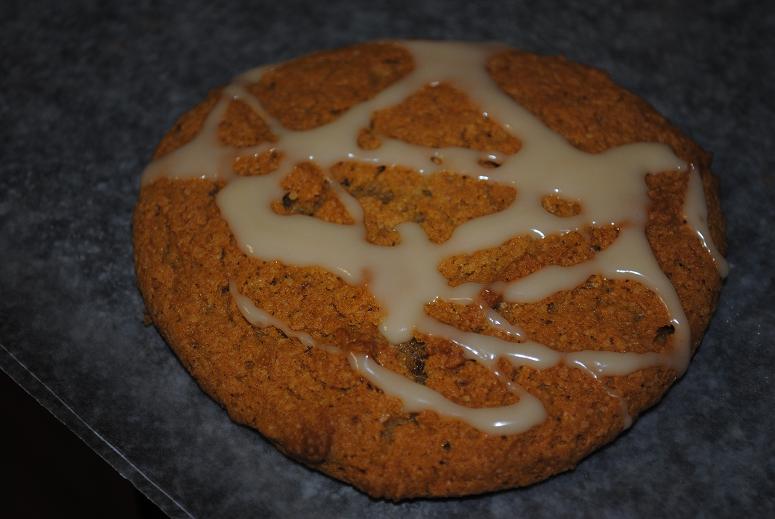