Long ago, for much of high school and even some early college breaks, I worked at a bagel store called Bruegger's Bagels.* While working in the same place for so long, you get tired of eating the same things over and over, so I would experiment with new foods and food combinations over the years. It helped that while I was working there, Bruegger's started introducing new foods and expanding their menu. One of the new foods I tried was a sun-dried tomato spread. I had never been a big fan of sun-dried tomatoes, and I'm still not, but dang was this spread delicious. As time passed, I stopped working at Bruegger's and then went vegan. Although there's stuff for me to eat there as a vegan, the sun-dried tomato spread is not on that list; it contains cheese and gelatin.

I had essentially stopped thinking about this spread until a ridiculous craving for it hit me.  Luckily, it turns out a vegan version of this is super easy to make and just as delicious as I remember (and without the non-vegan bits). I brought this to school the other day to eat on a bagel sandwich (everything bagel + faux turkey + lettuce + spread = magic). I also shared some with some colleagues over lunch and I was rewarded with rave reviews! Many of them asked that I share the recipe. So, colleagues, here you go! 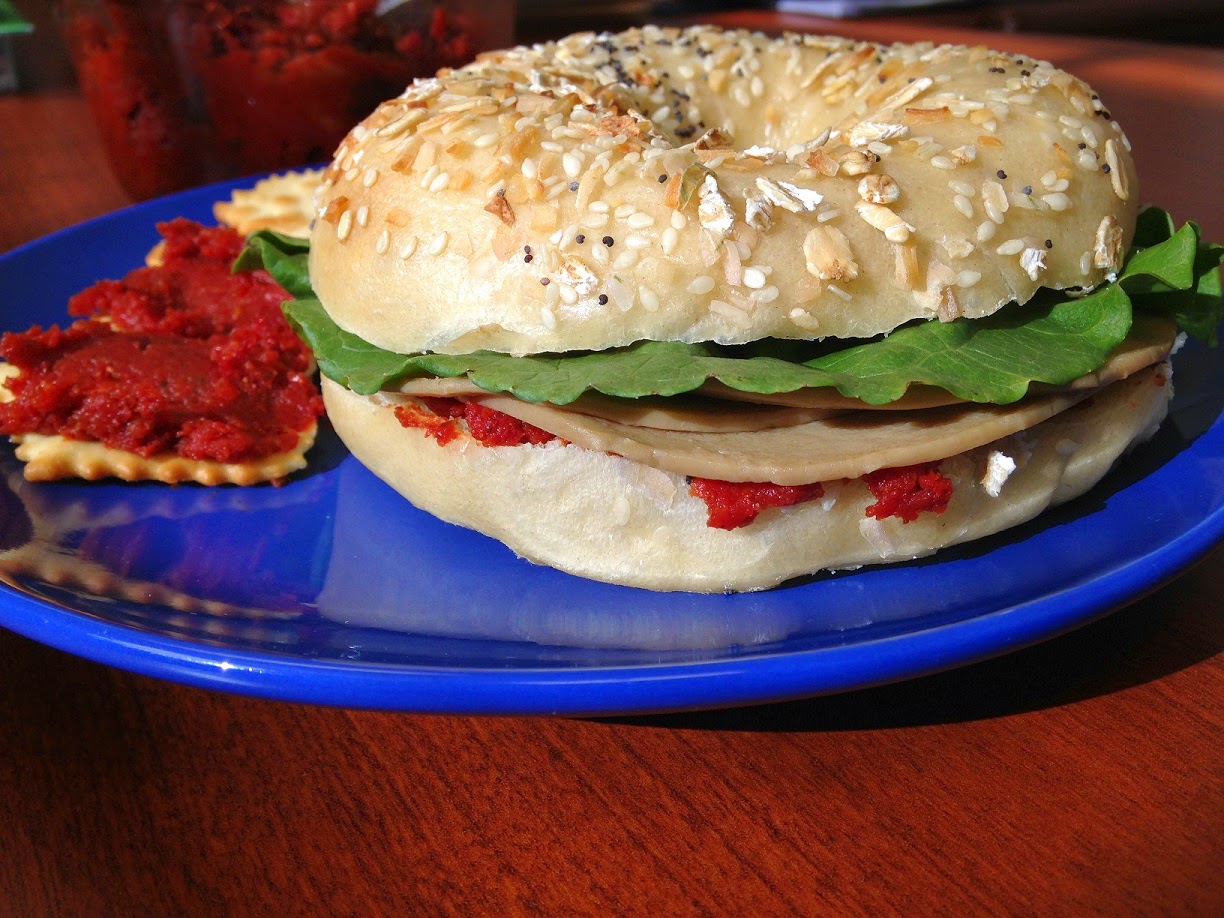 Despite the fact that I know we should eat something other than carbs for breakfast, that's often where we revert on weekend mornings. There are exceptions, such as tofu scramble, but carbs commonly grace our breakfast plates. Often I use Heart Smart Bisquick when I make pancakes, waffles, or biscuits, but the other week I was out and really craving biscuits. I figured it couldn't be that hard to make my own, so did some quick google searching. Turns out there are a ton of different ways to mix a few simple ingredients to make biscuits. After a bit of pondering (and a bit of guessing), I made an attempt at a recipe that turned out really well!

Even though the biscuits were delicious, I've got a rule. The rule for the blog, is that if I make up a recipe, I have to make that recipe at least twice before it gets posted. (FYI, if I make a recipe from a cookbook that's awesome, then I can post it after just one time, as it went through all sorts of testing before getting published.) Lucky for me, the second attempt at the biscuits turned out just as well as the first! Shana even said "good biscuits, love" multiple times during breakfast. We slather our biscuits with vegan butter and agave nectar, but you could easily do jam, maple syrup, gravy, or even use them to make a vegan breakfast sandwich (despite the addition of sugar, the biscuits themselves aren't sweet). Let me know what you do with your biscuits!

This semester I hope to cook a ton of new recipes. I'm pretty sure I say that every semester, but I am on a "pre-tenure leave" this semester, which means that I'm not teaching anything! Instead, my time will be spent working on writing up all the research I've been doing over the past years. I've got big goals (four manuscripts of the six I have waiting, plus seriously revising a class I will be teaching in the fall), but I have been told that I am also to take time to relax and rejuvenate. For me, that means cooking, singing, and reading books for fun. All of that sounds amazing.

To start off the semester of fun new foods, I decided to pick a recipe from an awesome cookbook that I've barely used: World Vegan Feast. Bryanna Clark Grogan is amazing. She has a number of awesome vegan cookbooks and an extensive vegan recipe blog. She also has an interesting background with family members from various parts of the world. Aside from her amazingness (not a word) as a cook, I also wanted this cookbook as a way to stretch my taste buds and culinary repertoire. This "coq" au vin does just that. The flavors are traditionally French for a taste of international cuisine when you don't have the money and time to actually go there! 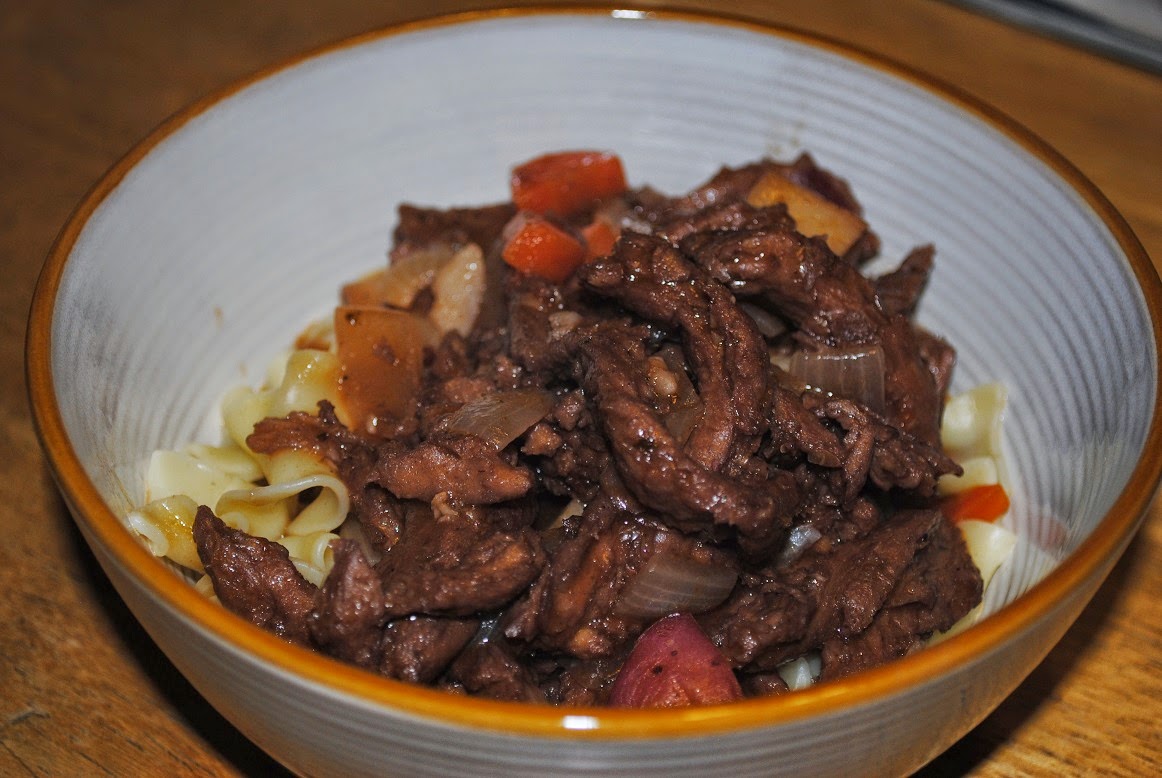 My wife loves routine. She loves the structure it provides to life. Shana's love of structure was another reason why the implementation of our meal plan has lasted for so many years. Her food routine spreads to breakfast, too. Nearly every morning, Shana eats a bagel (usually an everything bagel, sometimes a cinnamon raisin). However, at some point this past semester, Shana said that she'd not been eating a bagel because it was "too much" in the morning. Given that she teaches small children all day, having something for breakfast is important, and I lamented the fact that she doesn't like oatmeal due to its texture. She agreed with my lament, but it got me thinking if there was another way to get her to eat oatmeal (full of fiber, protein, a minerals like manganese, but low in fat and calories!).

Enter baked oatmeal; I hoped for all of the goodness, none of the texture issues. I did a lot of googling and found a ton of recipes, but most of them contained eggs and/or milk. Adding "vegan" to my search terms led to a bunch of recipes. Somewhat at random, I picked one that had some flavors I liked and dove in and hoped for the best. I'm so glad that I did because this recipe is AMAZING! It is easy to put together, has awesome texture and flavor (it tastes like fall!), freezes like a dream, and got Shana to eat oatmeal! 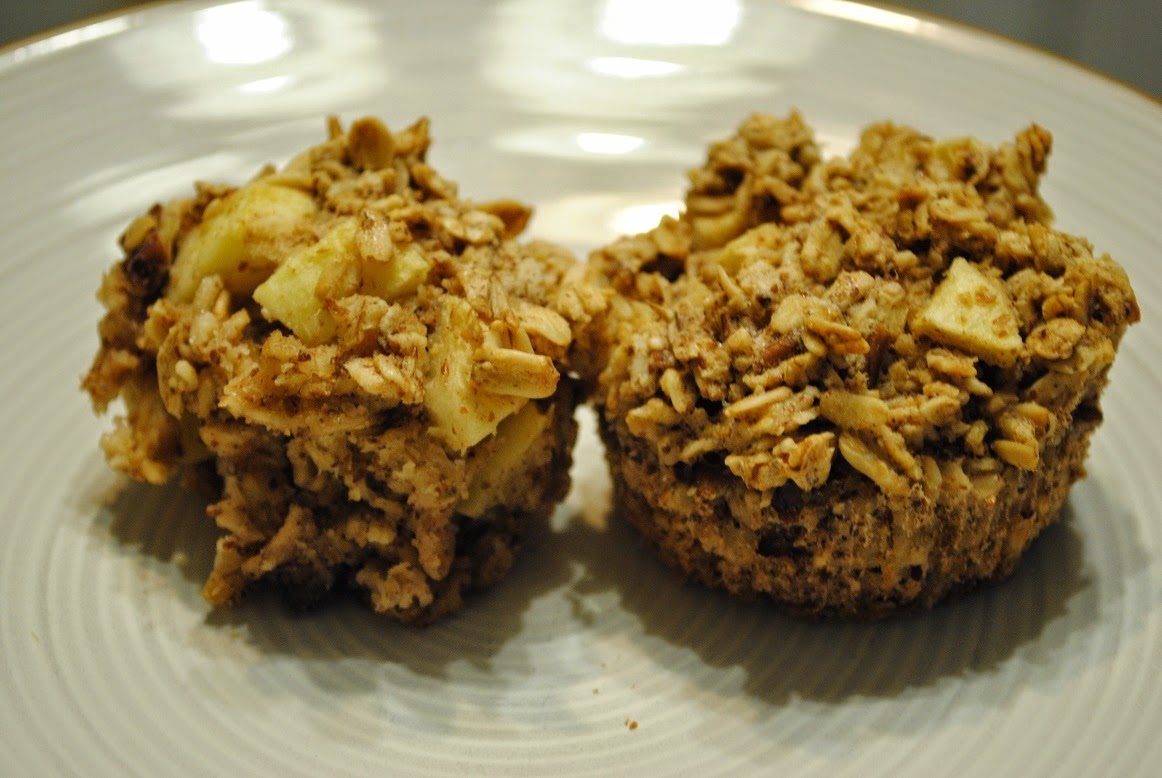 We spent a lovely evening last night with friends ringing in the new year with games and too much food and then Shana and I slept in this morning. According to our meal plan (made upon our return from Minnesota), we'd planned a new soup we've been eating for tonight, but Shana wanted to shuffle our remaining plans. The shuffle led to a new dinner tonight, which is kind of perfect - new year, new dinner! 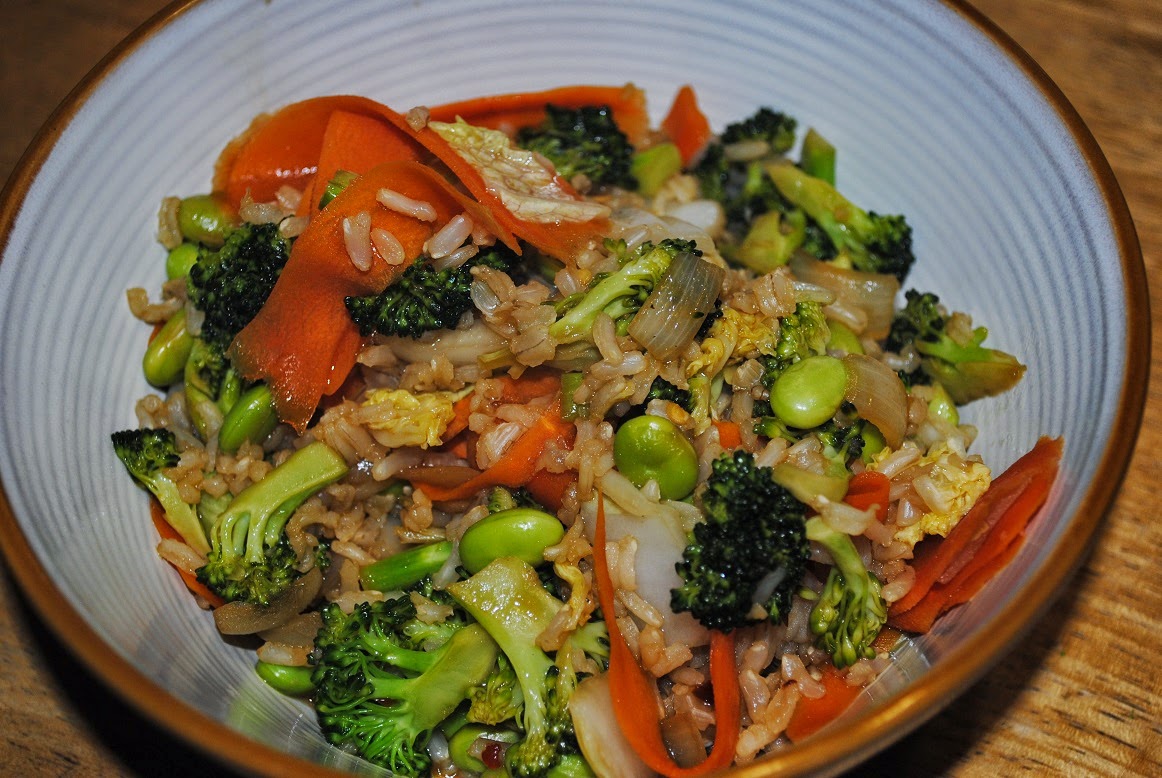 Coming quickly together (after the rice is cooked, anyway), this is a keeper of recipe and will be a part of our regular rotation. The homemade teriyaki sauce is full of flavor, the veggies provide a great range of textures, and the rice provides just enough chew to make you think you're eating a more carb-heavy meal. In addition, everything in this dish can be found at a well-stocked grocery store.