A few months ago, some friends moved from our town and threw a big going away party. They are always very conscious of the myriad eating habits of all of their friends, so they made sure that some vegan-friendly food was available. One of those dishes were tortilla pinwheels that some vegan potluck friends brought and I've been dreaming about since. They were so simple, but so delicious!

I finally decided I needed to stop dreaming, so I contacted the friend who made them for the recipe. Her response sounded pretty much like what I say when Shana asks how I made something new and delicious: "Well, I added some of this, some of that, a little bit of that, and some of something else." To Shana, that response is infuriating, but to me, it leaves the door open to experimentation. My friend said she used my sun-dried tomato spread recipe, a "hummus" made with cannellini beans and cashews, and arugula, but wasn't sure exactly what proportions she used or what other ingredients were in the hummus. That was enough of a start for me, so I set to work to figure out my own version.

My own version in hand, Shana and I made our way to a Fourth of July party. I cut into the rolls, hoping they'd stay together (they did) and made sure to express to our hosts and other friends that the recipe was new and that I'd love feedback and wouldn't be offended if people didn't like them. As the wraps disappeared, the only feedback I heard was "mmmmmmmmmmm" and "these are delicious, Maggie!" We took just a few of them home with us, but Shana ate them the next day and has been asking for them since. Recipe success! 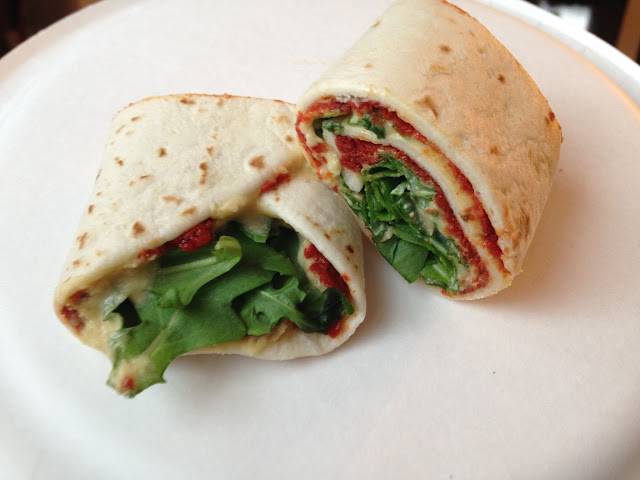