More than three years ago, I mentioned that there were some Peruvian recipes in Bryanna Clark Grogan's World Vegan Feast that I wanted to try. Let's just say that life got a little bit hectic between then and now.

In any event, we have some Peruvian friends who work with me at Earlham and we have a night of dinner and games with them. Last month, I told them that I wanted to try cooking a vegan version of a popular dish in Peru called lomo saltado. According to Robertson, this dish is an example of a fusion between Chinese and Peruvian cuisine and has become an incredibly popular dish all over the country. Our friends agreed.

When we first decided to make lomo saltado, I was a bit perplexed by the variety of flavors that I saw in the dish. Traditional to Peruvian cuisine, potatoes play a role, as does steak (for which strips of seitan substitute wonderfully), vinegar, lime juice, oregano, and cumin. Traditional to Chinese cuisine, we have the stir-fry technique, along with soy sauce and rice. I was skeptical until I took my first bite, wherein I discovered what a wonderful and flavorful fusion these two traditions created! Our Peruvian friends thought it was delicious, too! Shana and I decided to have it again this week, which is why I'm sharing it with you. 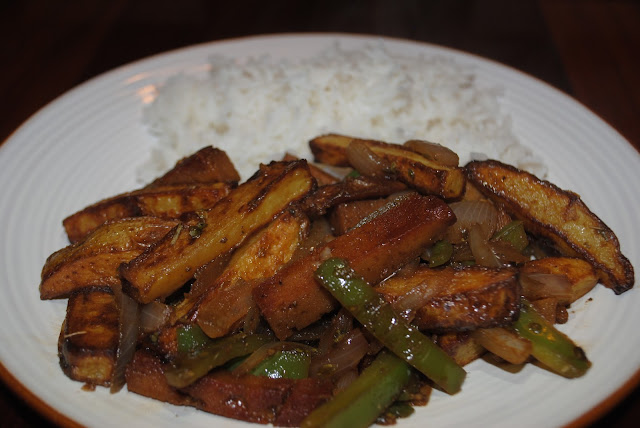