Sometimes I go to grocery stores and buy something I've never cooked with before because it looks interesting. I did that a while ago with some black lentils. Then, of course, they sat in my pantry for a long time because I didn't have a recipe that called for them.

Finally, I decided they had existed, unused, in my pantry long enough, so I started in on some creative googling. I don't remember exactly what search term or random list I found this recipe, but I flagged it as a good option. I loved the idea of a creamy soup with the toothsome chew of lentils. I loved the idea of a subtle influence of Indian flavors. I was intrigued at the addition of tahini.

More importantly, this soup had an ingredient that would make Shana want it, too. See, this beautiful creamy soup calls for eggplant.Shana loooooves eggplant. Me? I feel strongly middling about eggplant. It's fine. I never crave it and will always pick another option over it, but I don't hate it, either. But here, in this recipe, it looked like we would both have something to love. I was right. 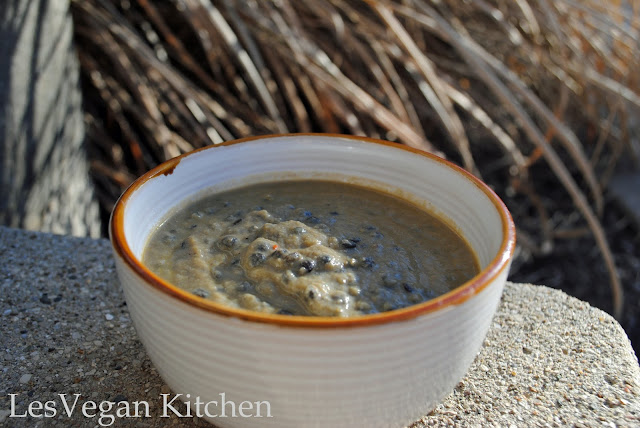