I love traditions. Growing up in a family with many traditions likely caused my love for them, but regardless of the reason, I love traditions. Christmas time, in my family, is a time filled with traditions. I could give you an hour-by-hour account of what happens on any given Christmas starting Christmas Eve morning through Christmas night. Although this year was a bit different than other years (my mother's health is failing), we're still engaging in most of the traditions that we've had for years.

One of those traditions is what we eat for breakfast on Christmas morning: caramel pull-apart rolls. Although historically this breakfast was ONLY for Christmas, while my sister and I were growing up it became a breakfast occasionally served at other times. One of those other times was a trip up to my family's cabin in high school. I brought along a group of my friends and my dad made these for breakfast. One friend, upon taking her first bite, said, "it's like eating candy coated clouds!" The name (description) stuck; I don't even know what they are actually called. As an adult, I've served it to many other people. My nephew LOVES this breakfast and requests it every time we visit. He's been helping me cook them since he was about 3. He knows the whole process (and how long it takes) and has been requesting that I post this recipe here for a while. 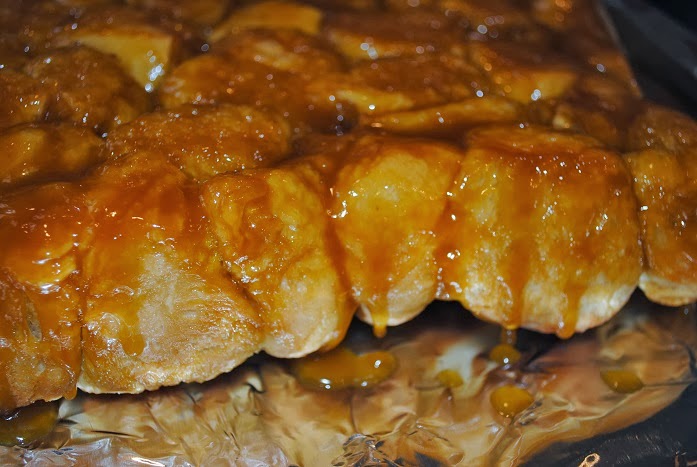 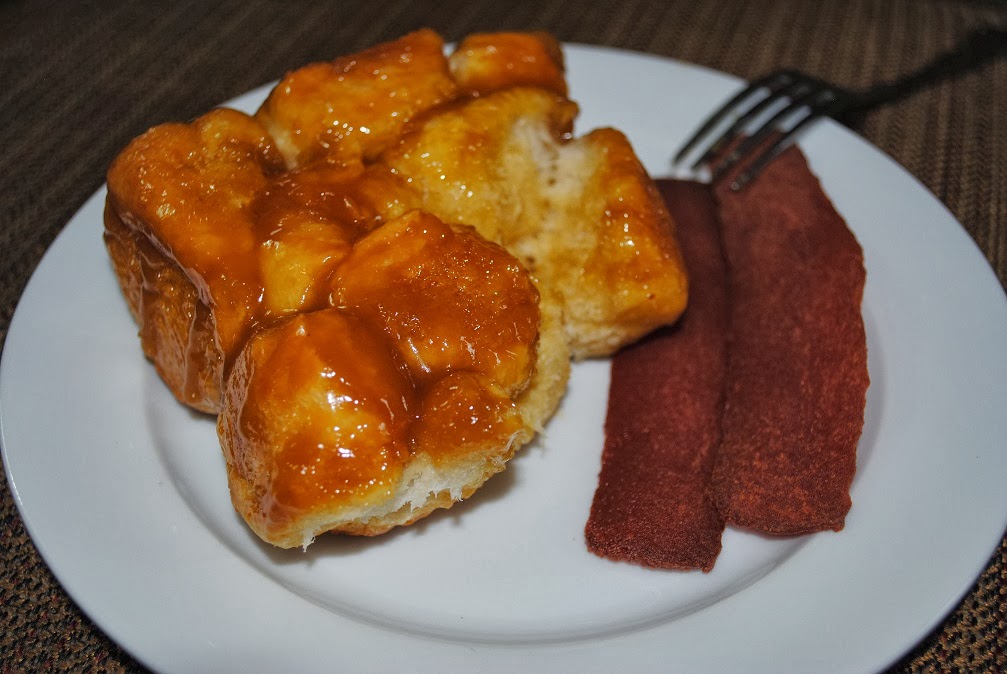 Before I go on, let me clue you in that this is NOT a healthy breakfast. It's a delicious treat of a breakfast, but certainly not something that should be a regular indulgence. But hey, it's Christmas!

It's official - we are both on break! This was Shana's last week of school (whereas I was done with scheduled stuff last week). Given the schedule of events and school obligations she had, Shana opted to stay in Indy two nights this past week. Although that's sad for both of us, she can't do things like enter grades at home as easily as I can, so it made sense.

As I mentioned a few posts ago, Tuesdays were the nights I'd been attempting and failing at crockpot dinners. This past Tuesday, I didn't even plan a dinner, which is almost blasphemous in our meal-planning household. I'd purchased a few things I figured I could eat, but nothing that was truly a meal. I wasn't worried, because I know my pantry is well-stocked enough that I could simply throw something together, but instead, I got inspired and made something amazing enough to share.

One of the things I purchased was an acorn squash. I decided I would eat that as part of my dinner, then got inspired thinking about what else to make. The result - a simple, savory, and delicious (!) stuffing - perfectly offset the sweetness of the roasted acorn squash. In addition, the mix of textures (smooth, chewy, and crunchy) gives the whole dish a "fancy" feeling, even though the hardest part of the whole process is probably cutting the acorn squash. Finally (just in case I haven't yet won you over), this is healthy! There's a whole grain, some protein, three veggies, and very little fat. Eat up! 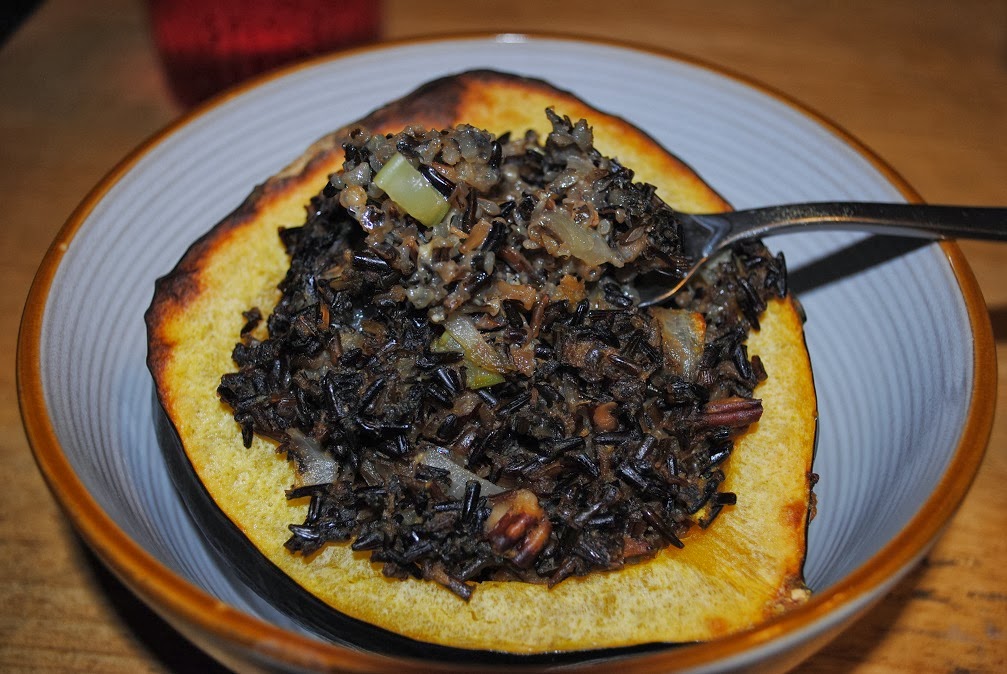 My grades are in, which means the semester is officially over for me! While I still have work I need to do (such a preparing for next semester, committee work, and paper revisions), having this unstructured time is lovely. I will get to all of the things I need to do, but I'll also intersperse fun things, like cooking up a storm, reading for pleasure, and holiday gatherings. Just last night we went to a lovely dinner with friends where we ate and laughed and trimmed a tree.

My food task for last night's gathering was to bring dessert. One of the hosts specifically requested my cinnamon cake (and apparently giggled with glee when I agreed to make it). I also decided to remake these candy cane chocolate chunk cookies that I'd made a few nights ago, because I wanted to experiment with ratios in the recipe. This attempt led to cookies that were exactly what I wanted them to be. When making them a few nights ago, the cookies were amazingly soft and delicious, but weren't quite right. They were flat and there was an unbalanced ratio of cookie additions to cookie dough. Shana reminded me that this was exactly how the cookies turned out every year (and that I responded in the same partially dissatisfied manner every year), but this year I was determined to make them into the cookies I envisioned. Success! 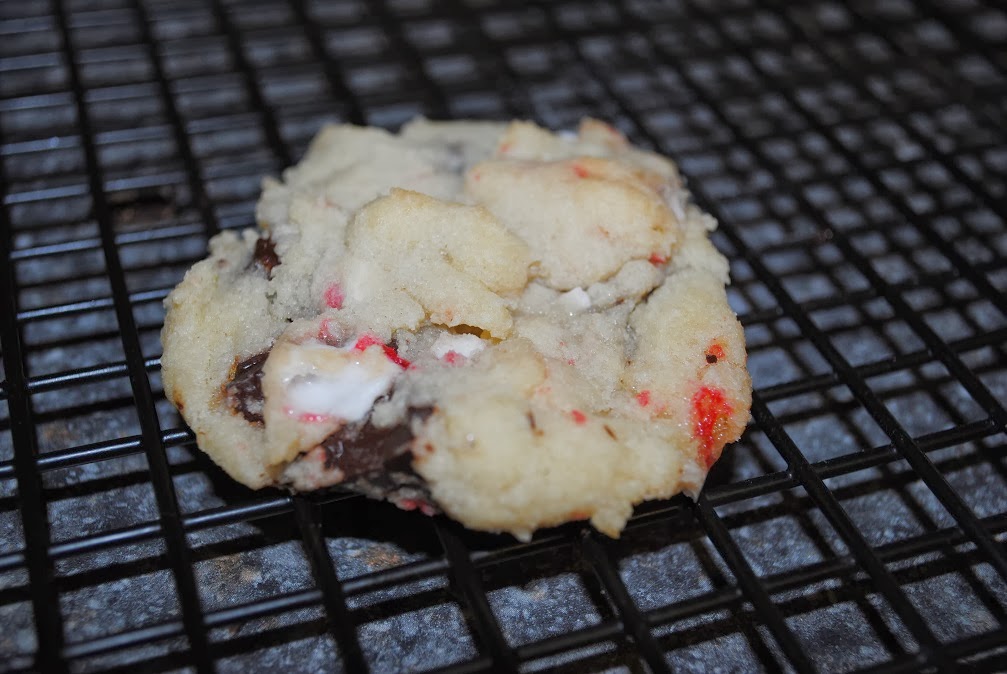 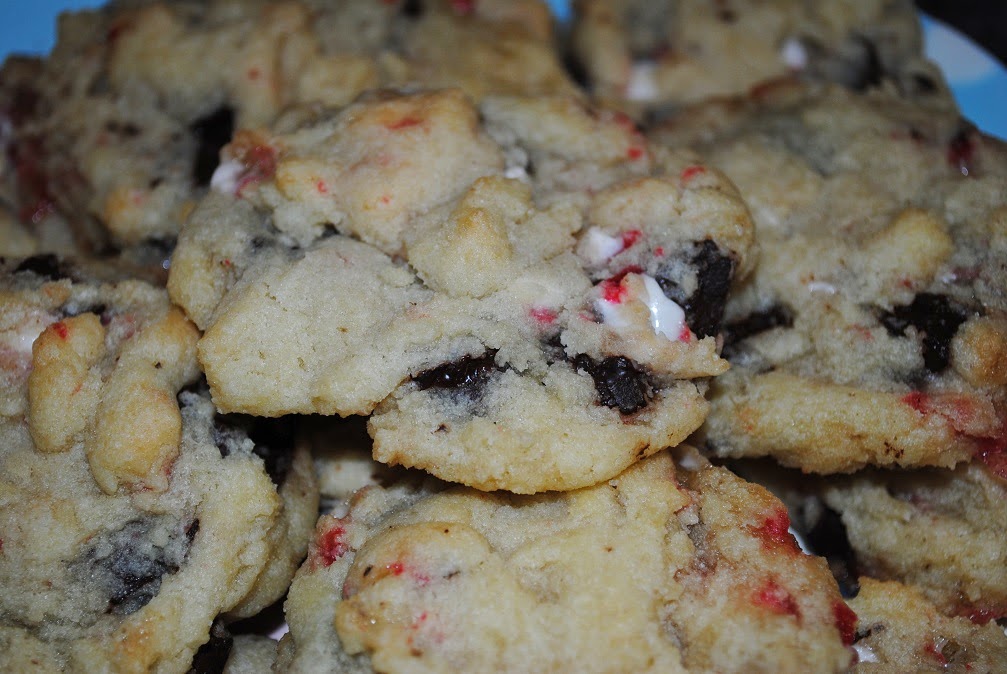 These cookies are perfect for holiday gatherings and for using up all those candy canes! The subtle mintiness in the soft dough, the toffee-like texture of the cooked candy canes, and the slight bitterness of the dark chocolate chunks are such an amazing combination. This recipe is originally one I found while perusing the recipes of the Vegan Chef. Although this recipe isn't listed on her website any longer, here it is.

I've just finished the last week of the semester at school; finals are next week. Due to some scheduling confusion with the finals schedule, I rearranged the last three days of my Psychology of Prejudice class, necessitating that we start class 30 minutes early on Thursday (my students were giving presentations on their semester-long research projects; research is awesome!). Because they are college students and I know full well that most of them roll out of bed to come to my class (and, let's be honest, because I love them), I told them I would make them treats since I was starting class earlier than usual.

Class was going to run from 10-12 on Thursday, so I needed mostly breakfast-y stuff for them to eat. I opted for a lot of fruit (pineapple, strawberries, kiwis, and blueberries), a pretzel/chocolate/pecan thing, as well as some baked items. Actually, lots of baked items. I made my grape nut bars, two sets of banana muffins (with nuts and without), and this amazing apple bread. While cooking on Wednesday night, I worried that I wasn't going to have enough food, so I started some creative googling. Eventually, I stumbled on a non-vegan recipe for a bread that looked good, made some adjustments, and ended up not even getting a piece to try while in class! I asked a couple of students about the bread after class (one student said she liked it so much she had two pieces - excellent!), and with the rave reviews, I figured I had to make it again. I am SO glad I did, because this bread is AMAZING! It's full of a subtle blend of apple/cinnamon/molasses flavors, it's sweet but not cloying, it's dense without being heavy, and it's moist with a wonderful mouth feel. For those of you who like my family recipe zucchini bread, make this bread! You'll love it! 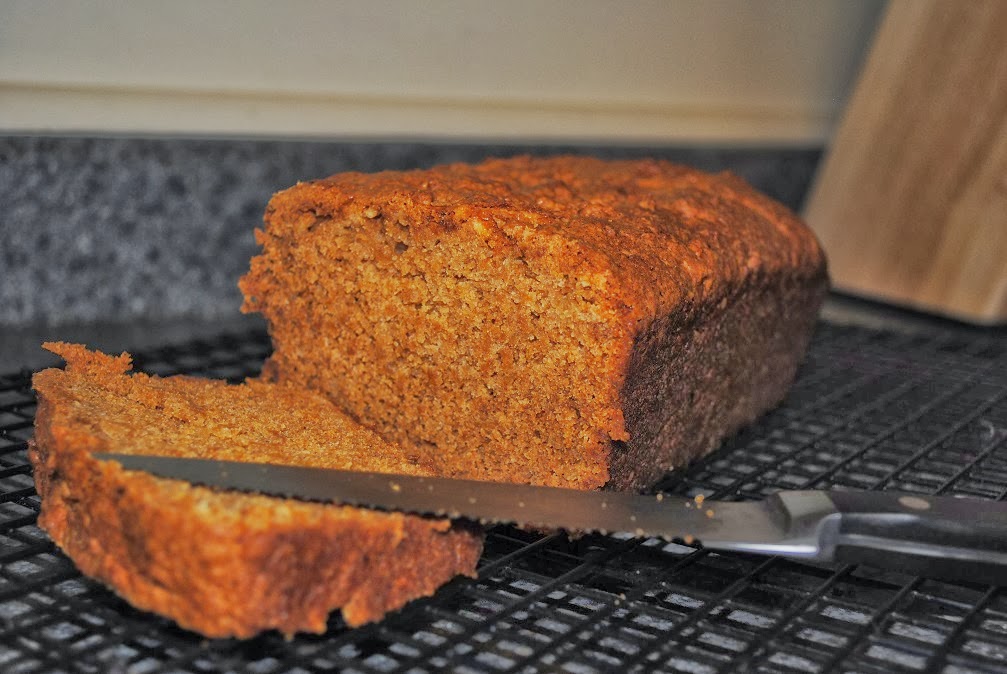 Apparently "Lazy Dinners" are a thing at our house. Tonight was a "Lazy Dinner." In fact, this dinner is more of a Lazy Dinner than Lazy Dinner Pizza, which was the first Lazy Dinner I posted. I've been attempting new crockpot dinners for the past few Tuesdays, as they allow me to spend more time working on nights when Shana stays in Indy. However, the past few attempts have been pretty bad. Their awfulness made me hesitant to try a new one this week. Instead, I decided on tacos. Shana's been on a "no tacos" kick, too, which made dinner even more perfect.

These tacos are a perfect dinner when you don't have a plan or only have about 10 minutes to cook (and actually, 10 minutes might be exaggerating the length of time I was in the kitchen). In addition, they are able to be customized in any way you'd like. I feel silly even calling this a recipe, but since the purpose of this blog is to show people that it's actually very do-able to be vegan, this is a super easy way to do so. Plus, tacos are just delicious. 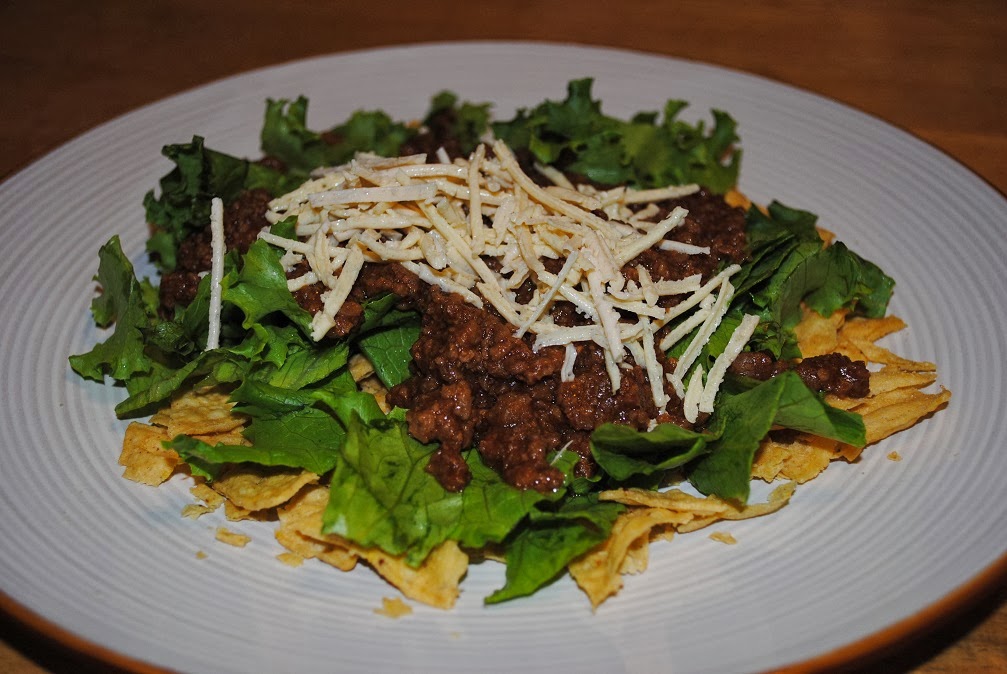