Every late fall/early winter growing up, my mom would make chex mix. It was a frequent snack and even more frequent gift - going to teachers, neighbors, and friends. The smell and taste of that chex mix is unmistakable. It is one of those recipes that is so easy and delicious, taking just a bit of patience for a long, slow bake and seemingly longer cool. Although her recipe wasn't vegan, it was easily veganizable, meaning that I make my own every year.

Because of the ubiquity of my mom's chex mix, I thought that was the only way to take the on-their-own unremarkable cereals and make them into something magical.

As it turns out, I thought wrong.

Growing up, Shana often had a ranch-flavored chex mix. While similar in idea, the chex mix in Shana's recollection involved a ranch seasoning packet and oil, no bake time, and thus, no cooling time. This fall, when I expressed an interest in making my version, Shana requested that I attempt to make hers. After some googling, including to assess the ingredients of a ranch packet (so not vegan), I made an attempt. It was...not right. Fine, but not right. After some discussion, I made another version and brought it with us on a trip to see all our best friends. That version was delicious - not to mention gone in no time once we arrived.

So, if you're a vegan adult with memories of a ranch-style chex mix, look no further. This takes less than 5 minutes to prepare and will last a bit longer than that if you make sure to hide some from the masses. 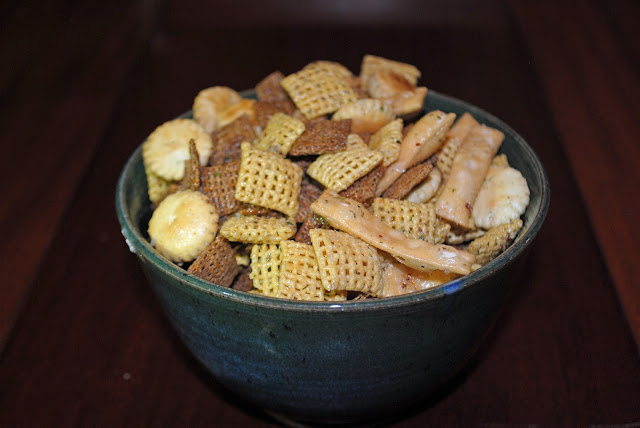