It's funny how sometimes you just don't realize how impactful some element of your life actually is. For example, my wife didn't realize how much growing up in a predominantly Jewish community affected her world view, including the foods she eats. Although I've written about making foods that honor Shana's Jewish heritage, such as frisket and matzo ball soup, there was one food we lamented that I'd never be able to make: a sweet noodle kugel.

Shana used to love her Mommom's sweet kugel, which was built around egg noodles, cottage cheese, and apricot preserves. Not a lot there that is vegan-friendly. Although I've been thinking about kugel for years, I kept getting stuck on cottage cheese, as there's no vegan equivalent. But then, when looking around the internet for recipes for a Shabbot dinner we were invited to* with some of Earlham's Jewish students, I found a recipe for kugel that looked like it might work for my purposes! Using a combination of sour cream and mashed tofu, I was hoping for a cottage cheese like texture. After a couple of attempts, where every time Shana would get excited and nostalgic all at one, I finally stumbled upon a recipe that replicates Shana's Mommom's sweet kugel. 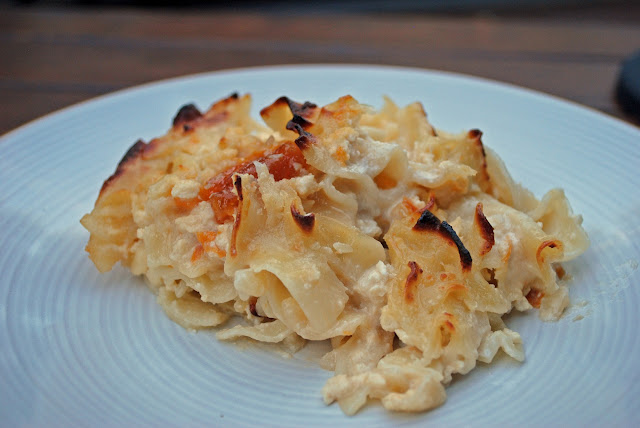 Directions
Preheat your oven to 350.
1. Cook the noodles according to package directions. Drain.
2. Meanwhile, cut the tofu into 4 smaller slabs and press the water out a bit. Put the tofu in a bowl and mash it with a fork until there are small chunks.
3. Add the sour cream and agave nectar to the tofu, stir.
4. Add the rest of the ingredients (cooked noodles, melted butter, sugar, preserves) and stir well to combine.
5. Place in a shallow casserole dish and bake for about 35 minutes. Then, switch to broil for just a couple of minutes to brown the top - watch carefully!
6. Let rest 10-15 minutes before serving.

* For the record, I didn't bring kugel to that dinner. Instead, I made apple cake, as it was during Passover, when apple cake is a traditional dish. I also made my lentil soup, which was devoured.