I noticed tonight while I was looking at past blog posts that we eat a lot of soup. This is my 16th post and the 4th about soup. To be perfectly honest, that's an almost accurate representation of our autumn/winter eating. It's incredibly common for us to eat two soups per week during the colder months. Part of that has to come from my deep love for all things soup. When Shana and I were first dating, we somehow got to talking with friends about what we would eat if we could only eat one thing for the rest of our lives (aka our favorite foods). I replied "soup" and Shana called me a cheater. Maybe it is cheating a little bit, but soups are awesome! You can throw stuff in a pot and out comes (9.8 times out of 10) something delicious! I know I'll be posting more soups here, including one we affectionately call "fatty fatty potato soup" (which is a bit fattier than other soups we make, but isn't too bad...).

Okay, enough babble and on to the recipe. On our meal plan for the week, we'd planned for a barley soup last night. I wasn't feeling a regular "veggie" soup with the simple inclusion of barley, so I got creative. Luckily, what I came up with was good! Plus, this soup is full of umami flavors, which is one of the major complaints people have about vegan food (even though they often don't phrase it quite like that). Although I've labeled this recipe "quick" barley soup, it's not a super fast soup because barley takes a bit of time to cook. This one saves time by using "quick" barley (think "quick" oats), but still has about 20 minutes of simmering time before the barley is ready. It's worth it though! 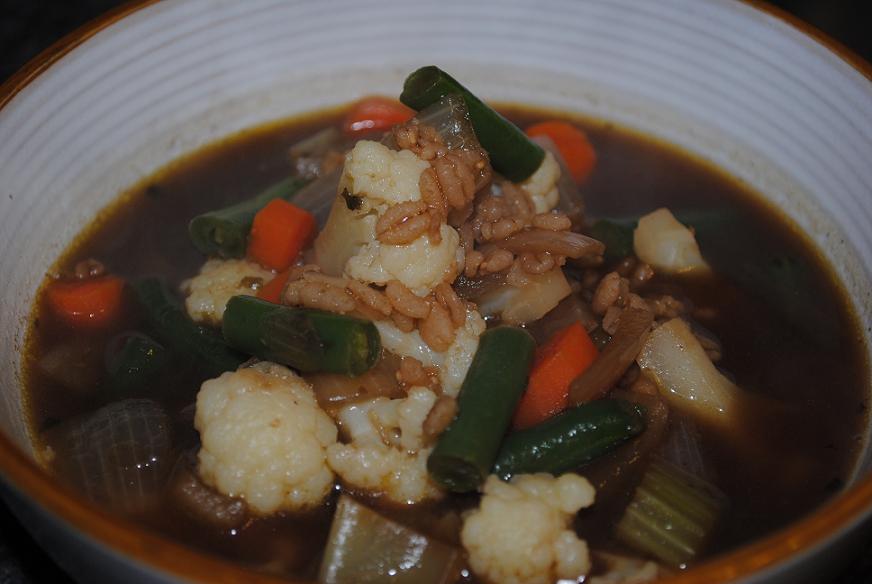 Directions
1. Saute onions and celery in a bit of oil in a stock pot. Add garlic and saute for another minute. If using the wine, pour it in to deglaze the pot.
2. Add water, broth, mushroom soup, carrots, and barley. Bring to a boil then reduce head to med-low or low, cover, and simmer for 10 minutes.
3. Add remaining ingredients, cover, and simmer an additional 10 minutes.