Hanukkah is coming up. Neither of us is religious, but we both grew up with holiday traditions. Although Shana's Jewish traditions weren't my own, many of my friends were Jewish while growing up, so they are more than a bit familiar to me. One major tradition at Hanukkah is eating challah bread. Beautiful, braided, sweet, soft, magical challah bread; generally full of eggs. 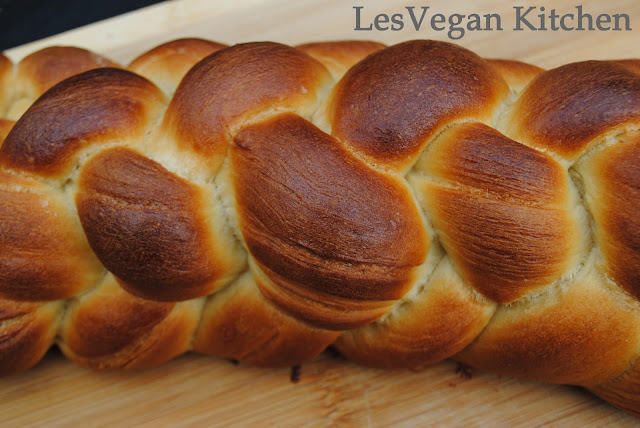 A while ago I had an idea to try to make challah, figuring there had to be a way to make that magic vegan-friendly. Plus, the way Shana's eyes lit up when I mentioned the idea meant I had to try. More important was the way her eyes closed in pleasure when eating the finished bread. One way I show my love is through feeding people, so feeding my wife a food she'd not had since childhood made my heart overflow. It was only a matter of time before I'd make it again. With Hanukkah coming up in less than two weeks, I can feel the magic coming. 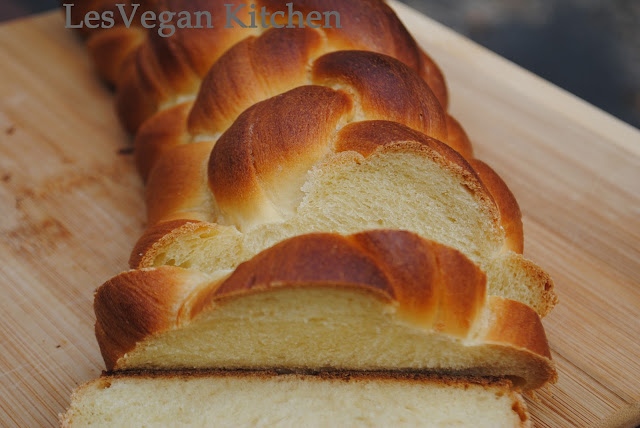 Directions
1. In a small bowl, combine the yeast and warm water, adding the generous pinch of extra sugar. Stir to combine and let sit until there is a frothy layer on top.
2. Meanwhile, mix the flour, 1/4 c. sugar, and salt in a bowl (I use my stand mixer with a dough hook attachment.
3. Make your yolk replacement and whole egg replacement in small jars with tight fitting lids (see Helpful Hints).
4. Add the two egg replacements and oil to the dry ingredients, turn the mixer on. As this mixes, add the yeast and water. Mix until well-combined.
5. Knead at a low speed for about 7 minutes. Sometimes you will need to add a bit of flour to make sure the dough isn't sticky, add 1 T. at a time.
6. Oil a bowl and then add the dough. Let rise for two hours or until doubled.
7. Cut the dough into even pieces, then roll each piece into a long rope. Make as many pieces as you would like to braid. 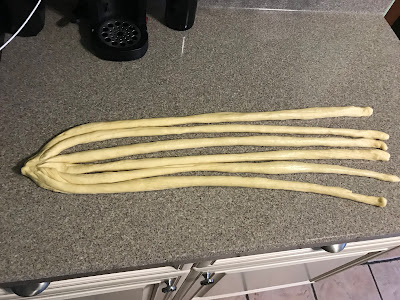 8. Braid! My preference is 6 strands and I use this technique for braiding. Then move the braided challah to a baking sheet lined with parchment paper. Cover it with a towel and let it rise in a draft-free place for about an hour (it should be nice and fluffy).

9. Preheat your oven to 350. Meanwhile, whisk together the soymilk and maple syrup. Brush this mixture over the dough (get the sides and in the cracks of the braids, too).
10. Bake for 30-35 minutes. Let cool then slice and serve.

Ps. Shana was upset that I didn't write "HOLLA!" anywhere in this post.