So... we went to a mac & cheese party this past weekend. No joke. Sounds like a weird place for a vegan to go. Nevertheless, go we did. 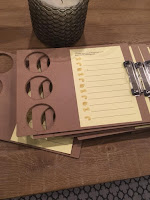 The mac & cheese party was hosted by Shana's former principal and her husband; it was their second annual mac & cheese party. They held their first event last year because getting tickets to the Indianapolis Return of the Mac festival was apparently really difficult. Our hosts planned very well! The party had 14 entries, which party goers tasted in small cups that rested perfectly in holes drilled into clipboards. This allowed you to take notes as you ate. After eating them all, you voted* (via google form) for your favorite entry in three categories: best overall, most innovative, and most gourmet.

After deciding to go, we debated just going for fun, but then Shana reminded me that she'd asked me to veganize a cheesy taco mac recipe she saw in one of those food videos. My first attempt to make this dish was a delicious success, but we hadn't had it in over a year! I was intrigued with the idea of adding a vegan entry to the mac & cheese party, but decided I needed to test it once more. A second successful result (with a few tweaks from the first) made me confident it would be okay as an entry.

As it turned out, we didn't win, but came in third in the best overall category and had the second most votes overall! Moreover, people didn't know it was vegan until Shana announced it after the votes were tallied. All in all, that makes this a winner in my book. 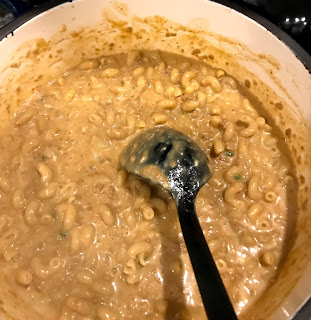 Directions
1. Saute the onion and jalapeño in a small amount of oil in a large pot until the onions are soft.
2. Add the faux burger crumbles, breaking them up if necessary.
3. Add the taco seasoning, noodles, and broth, stirring well.
4. Simmer, covered, stirring occasionally until the pasta is soft. There will still seem to be a reasonable amount of liquid, but the pasta will continue to absorb the liquid. Compare the picture at right to the one above.
5. In a jar with a tight-fitting lid, shake the vegan sour cream and water to mix, then add to the pasta.
6. Add the shreds of Daiya, stirring until melted and combined.


* I didn't vote, because I only ate my entry and that didn't seem fair.